Critically acclaimed actor — with a roofing industry background — Anthony Mackie has teamed up with GAF and their Community Matters initiative to help rebuild Gulf Region roofs hit by extreme weather.

Anthony Mackie is world-famous for his portrayal of Sam Wilson as Falcon and Captain America in the Marvel Cinematic Universe, but his heroism isn't limited to the silver screen. His newest superhero task includes partnering with GAF to put roofs on vulnerable Gulf Region homes. This initiative — part of GAF's $25 million commitment through 2025 to help build more resilient communities — aims to rebuild or repair 500 roofs damaged by natural disasters in the Gulf Region.

Fittingly, the collaboration kicked off with 150 roofs in Mackie's hometown of New Orleans.

As a New Orleans native raised by a family of roofers, Mackie's partnership with GAF's Community Matters was a natural fit. Raised in Gentilly, a blue-collar neighborhood in the city's 7th Ward, Mackie learned by example about the importance of helping neighbors in need. He saw family lend a hand when elderly neighbors needed home repairs and he spent his teenage summers working for his uncle and dad at Mackie One Construction, which has been a trusted supplier of roofing services in the area for over 50 years — since its founding in 1965 when Hurricane Betsy caused dramatic storm-surge damage across the city. With the GAF partnership, Mackie not only returns to his roofing roots but also hopes to help build up the communal sense of "neighbors helping neighbors" that was a feature of his youth.

Helping a Community in Need

New Orleans is a vibrant, world-renowned city but it also contends with longstanding poverty. Many residents lack the resources to repair or rebuild a storm-damaged roof after a natural disaster. Blue tarps, meant to be a short-term roofing solution, are instead the long-term reality for many families. This solution can actually be destructive since, over time, tarping perpetuates home damage by increasing a roof's vulnerability to future storms. Together, natural disasters, poverty, and short-term "fixes" only compound the threats to families' housing security.

In the 7th Ward where Mackie grew up, such blue tarps ominously dot the landscape. Because of this, Mackie was excited by the opportunity to join forces with GAF to help his neighbors protect the foundations of their homes. Repairing and rebuilding roofs in tandem with GAF lets Mackie give back to his neighborhood in the way his parents raised him — helping out on the roof. 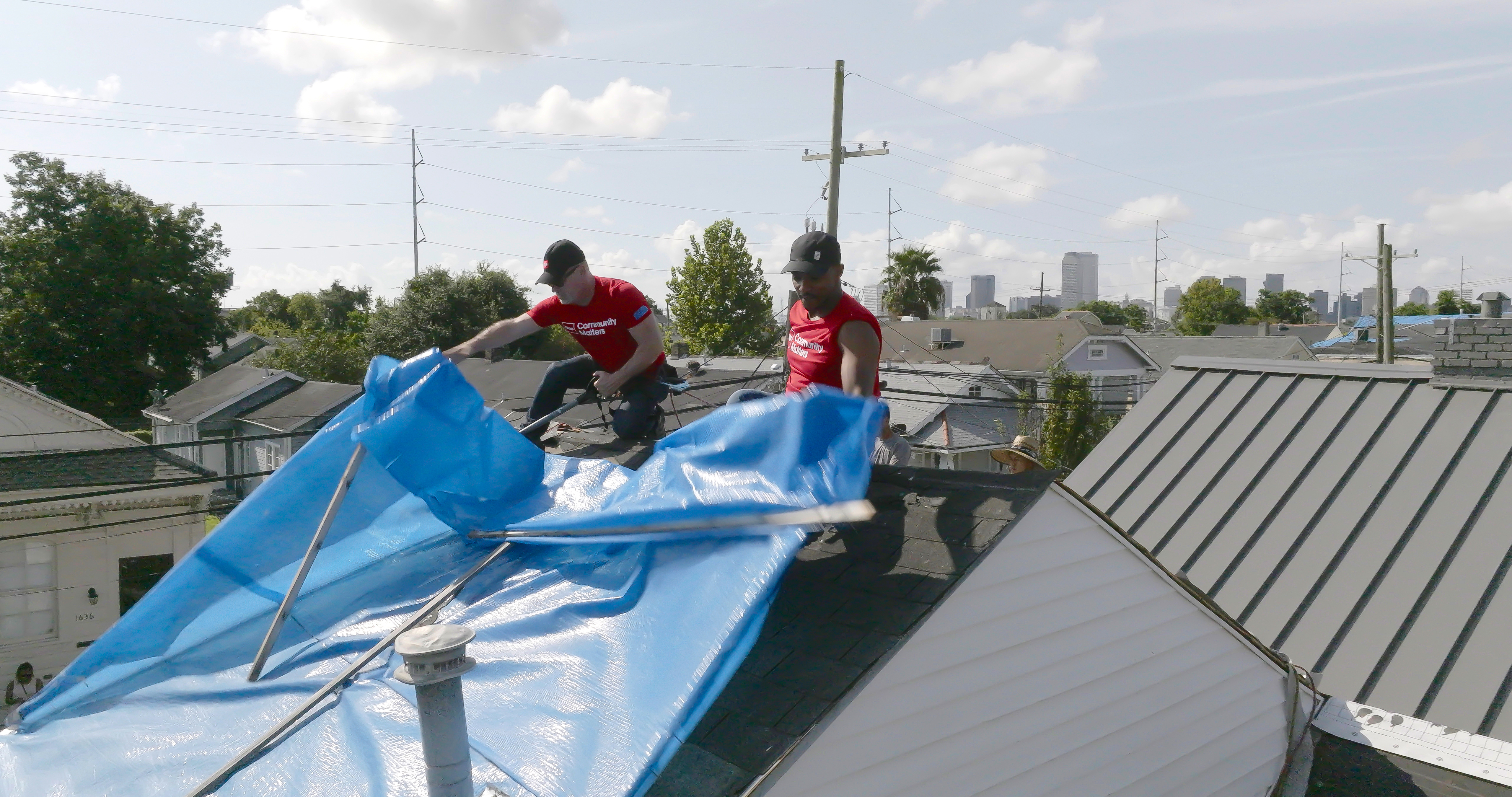 Being Ready for Future Extreme Storms

New Orleans and the Gulf Coast are regularly ravaged by storms — which can change lives in an instant. The GAF Community Matters effort will help protect some of the region's most vulnerable residents while boosting the ability of these neighborhoods to develop more resilience for when the next storm hits.

For Mackie, the impact that severe storms have had on his life is a driving force behind his participation. His dad passed away as a result of Hurricane Katrina and his father's pride and joy, his handbuilt home, was damaged when Hurricane Katrina storm waters breached the levy in his backyard. Then, Mackie's own home was impacted by disaster during Hurricane Ida — he learned it had been damaged from the news. So he understands the importance of doing all that's possible to protect a home against natural disasters.

Training the Next Generation of Roofers

After a storm, communities need time and resources to recover. Without roofers, though, even those with the financial means to schedule a repair may be stuck with a tarped roof for months, even years. Mackie himself had to wait a full year after Hurricane Ida before his storm-damaged roof could be replaced. This dire need for trained roofers was another reason the GAF Community Matters initiative struck a chord with Mackie.

The initiative provides essential roofing skills training for locals through the GAF Roofing Academy to members of the community. This means an immediate increase in the number of people with skills to help rebuild, ensuring more trained roofers become available in the regions that need them most. For Mackie, the long-term aspect is fundamental: access to good wages for skilled, reliable work in an essential trade helps residents to feed their families and take care of their homes.

When he was young, Mackie's parents — and his experiences in the roofing trade — taught him about resilience and hard work. New Orleans itself is a shining example of both of these qualities in the face of repeated natural disasters. But the setbacks have been severe. Roughly 10,000 families are still displaced one year after Hurricane Ida and 26% of homes in the 7th Ward are still vacant nearly 20 years after Hurricane Katrina. But still, the heart of New Orleans keeps beating.

Maybe it's the gumbo, maybe it's the music, but the truth for Mackie is that there's no place like home. And what he sees for this initiative is a way to empower those that call the Gulf Region home by helping strengthen their communities through infrastructure, job training, and resources. By leading the way with community service and action, Roof Raiser Anthony Mackie is not only helping residents to shield themselves against natural disasters, but also to approach the long-term future with increasing confidence, prosperity, and resilience.

Want to learn more about the Community Matters initiative? Visit gaf.com/communitymatters for more information on how GAF and Anthony Mackie are teaming up to help communities and improve resilience.

By Satta Sarmah Hightower
Build a
Rewarding Career
Under Our Roof
LEARN MORE
Don't Miss
Another Post
Be on the lookout for updates from GAF Roof Views in your inbox.
Don't miss another GAF RoofViews post!
YOUR HOME
Common Attic Ventilation System Solutions by Roof Style
LEARN MORE

Ventilation is defined by the U.S. Department of Energy as "the exchange of indoor and outdoor air." This sounds simple enough, but if your home's attic is not properly ventilated, excess heat and moisture cannot escape and can lead to a plethora of concerns for your home, your roof, and your wallet.
By Karen L Edwards
IN YOUR COMMUNITY
Roof Raisers: JF Lopez's 100 Roof Pledge with Habitat for Humanity
LEARN MORE

You can change the world by helping your neighbor, and the folks at JF Lopez Roofing are living proof. In partnership with the GAF Habitat for Humanity Contractor program, the company — based in Fond du Lac, Wisconsin — pledged what it calls the Legacy 100: the goal of installing 100 roofs on Habitat for Humanity homes over 10 years. With roof number 55 completed by the close of 2022 and more slated for 2023, these roofing heroes are already more than halfway there.
By Annie Crawford
IN YOUR COMMUNITY
Roof Raiser Anthony Mackie: A Superhero Helps Rebuild Gulf Region Communities
LEARN MORE

Ventilation is defined by the U.S. Department of Energy as "the exchange of indoor and outdoor air." This sounds simple enough, but if your home's attic is not properly ventilated, excess heat and moisture cannot escape and can lead to a plethora of concerns for your home, your roof, and your wallet.
By Karen L Edwards
IN YOUR COMMUNITY
Roof Raisers: JF Lopez's 100 Roof Pledge with Habitat for Humanity
LEARN MORE

You can change the world by helping your neighbor, and the folks at JF Lopez Roofing are living proof. In partnership with the GAF Habitat for Humanity Contractor program, the company — based in Fond du Lac, Wisconsin — pledged what it calls the Legacy 100: the goal of installing 100 roofs on Habitat for Humanity homes over 10 years. With roof number 55 completed by the close of 2022 and more slated for 2023, these roofing heroes are already more than halfway there.
By Annie Crawford
BUILDING SCIENCE
Defending Against Very Severe Hail
LEARN MORE

Think that your roof doesn't need protection against hail? Think again. Severe hail events are increasing in geographic footprint and are no longer just in hail alley. The geographic region that experiences 1 inch or larger hailstones has expanded to be nearly two-thirds of the United States. Nearly 10 percent more U.S. properties, more than 6.8 million, were affected by hail in 2021 than in 2020. Coinciding with the increase in properties affected by a damaging hail event in 2021, there was also an increase in insurance claims, which rose to $16.5 billion from $14.2 billion in 2020.
By Kristin M Westover PE
RESIDENTIAL ROOFING
What Is It Like to Be a Roofer?
LEARN MORE

To get a firsthand account of what it's like to be a roofer, GAF spoke with Trenton Wisecup, president of Arrow Roofing Services in Michigan, and David Laurain, Arrow Roofing's vice president, to learn about their experiences in the roofing industry.
By Dawn Killough
COMMERCIAL ROOFING
How Commercial Skylights Can Boost Revenue
LEARN MORE

Around the globe, excess heat collects in urban areas and can contribute to increased heat-related death and illness, diminished quality of life, and reduced economic opportunities. Such areas are known as "urban heat islands." Fortunately, cooling strategies are now available and being used in initiatives like the GAF Cool Community project to help mitigate urban heat island effects. Such cooling strategies are supported by products such as such as GAF StreetBond® pavement coatings with Invisible Shade™ — named by TIME magazine as one of its Best Inventions of 2022.
By Annie Crawford
This blog contains information created by a variety of sources, including internal and third party writers. The opinions and views expressed do not necessarily represent those of GAF. The content is for informational purposes only. It is not intended to constitute financial, accounting, tax or legal advice. GAF does not guarantee the accuracy, reliability, and completeness of the information. In no event shall GAF be held responsible or liable for errors or omissions in the content or for the results, damages or losses caused by or in connection with the use of or reliance on the content.