Recycled Shingles are Keeping Asphalt Out of Landfills

In March 2022, the first-ever roof constructed from shingles partly composed of recycled asphalt was installed on a Florida home. The groundbreaking shingles were developed by GAF using recycled asphalt shingle (RAS) technology and have received several recognitions. They were named by Popular Science as one of the Best of What's New for the Home, and by Fast Company as one of the "Next Big Things in Tech" in the "Sustainability" category, bringing "some welcome circularity to the roofing economy" by allowing new shingles to be made using material reclaimed from old ones.

According to estimates by the Environmental Protection Agency (EPA), 11–13 million tons of asphalt shingles are torn off roofs in the U.S. every year. Less than 10% of that material is recycled into roads or other paving projects, while the remaining 90% ends up as waste in landfills. As the leading manufacturer of asphalt shingles, GAF felt a responsibility to use its expertise and resources to help reduce this environmental impact.

To do this, GAF developed a process that uses end-of-life roofing shingles to create briquettes that can be used to manufacture new asphalt shingles, without any reduction in product quality. Forbes magazine featured the new shingles as an Editor's pick, sharing that the company aimed to divert one million tons of asphalt shingle waste from landfills annually by 2030.

During a pilot program conducted at facilities in Lockport, NY and Tampa, FL, GAF found they were able to use about 90% of the shingle waste material they collected and produce new asphalt shingles containing approximately 7% recycled content. This reduces the amount of virgin material needed and diverts shingle waste that would otherwise end up in a landfill. This introduces circularity into a previously linear industrial process by returning torn-off asphalt shingle material to the "beginning" of the workflow to help build new roofs.

GAF patented this breakthrough RoofCycle™ Process and the new RAS-containing shingles as the Timberline HDZ® RoofCycle™ Series. Now it was time to test them out in the real world. 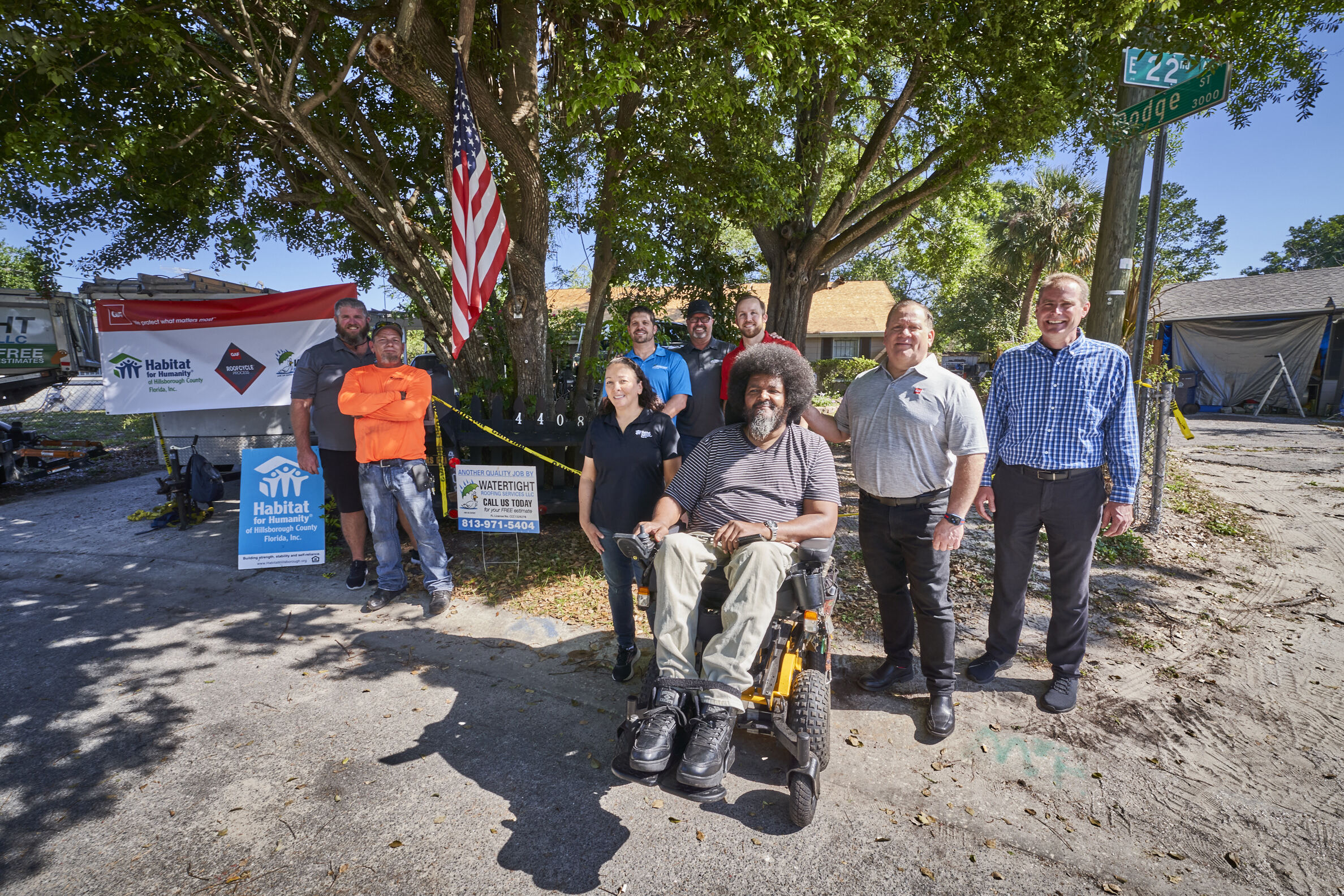 Team members from GAF, Watertight Roofing Service and Habitat for Humanity gather to honor Horace Montgomery with a new roof.

The first roof installation was destined to be donated to a Tampa, FL family: local TV station, 10 Tampa Bay, had reported that the recipients of the new roof — Horace Montgomery and his son Carl, both veterans residing in the home where Carl has lived for 50 years — needed to replace their roof. It was a replacement that they couldn't afford. That's when Habitat for Humanity of Hillsborough County and GAF stepped in to help. The installation was completed by local GAF Master Elite® contractor Watertight Roofing Service. Speaking to 10 Tampa Bay, Carl said: "It's a wonderful feeling. You can't help but be so grateful that somebody would come out and do all this."

According to the EPA, reducing the amount of construction and demolition waste delivers more than environmental benefits. The process fosters "employment and economic activities in recycling industries [that] provide increased business opportunities within the local community, especially when deconstruction and selective demolition methods are used."

The RoofCycle™ Process is a case in point: GAF has announced plans to open their first commercial-scale asphalt shingle recycling operation in Corsicana, TX. It will be designed to take end-of-life roofing shingles and create high-quality recycled asphalt briquettes that can be used in the manufacture of new products. Once operational, the plant is estimated to divert 300,000 tons of waste from landfills each year. RAS briquettes produced in Corsicana will be transported to GAF's Ennis, TX shingle plant which is undergoing an expansion to accommodate the manufacturing of Timberline HDZ® RoofCycle™ shingles.

Once the new recycling plant and the Ennis expansion are up and running, GAF plans to expand their capabilities to incorporate RAS into all of their asphalt shingle products, and aims to divert one million tons of asphalt shingles annually from landfills by 2030.

The company has committed more than $100 million to bring the RoofCycle™ process to commercial scale. To learn more about the containing recycled content and to get notified when they will be available in your area, visit the GAF shingle recycling page.

By
LEARN MORE
Don't Miss
Another Post
Be on the lookout for updates from GAF Roof Views in your inbox.
Don't miss another GAF RoofViews post!
IN YOUR COMMUNITY
Roof Raiser Anthony Mackie: A Superhero Helps Rebuild Gulf Region Communities
LEARN MORE

It's easy to think that there are as many roof types as there are buildings. In truth, there are only a few standard kinds and variations are made by combinations of these. The type of roof you select for your home or addition will influence a lot of other factors, including overall cost, what materials you can use, and how much of the roof is visible from the street.
By Dawn Killough
IN YOUR COMMUNITY
GAF's Sustainability Promise: A Year of Social Impact
LEARN MORE

"As industry leaders, we have a responsibility to use our expertise and resources to make a positive impact on our communities and our planet, which is why we've set these ambitious goals. We are making strategic investments to achieve those goals and, ultimately, to leave the planet better than we found it for our children – and their children." —Jim Schnepper, CEO of GAF, Earth Day, 2022
By Jeff Terry
LATEST UPDATES
COMMERCIAL ROOFING
How Commercial Skylights Can Boost Revenue
LEARN MORE

Around the globe, excess heat collects in urban areas and can contribute to increased heat-related death and illness, diminished quality of life, and reduced economic opportunities. Such areas are known as "urban heat islands." Fortunately, cooling strategies are now available and being used in initiatives like the GAF Cool Community project to help mitigate urban heat island effects. Such cooling strategies are supported by products such as such as GAF StreetBond® pavement coatings with Invisible Shade™ — named by TIME magazine as one of its Best Inventions of 2022.
By Annie Crawford
IN YOUR COMMUNITY
Helping Stillman College Breathe New Life into a Historic Building
LEARN MORE

The GAF manufacturing plant in Tuscaloosa, Alabama sits just a half mile away from Stillman College, a historically Black university with a rich history in the area. The school was first formed as the Tuscaloosa Institute in 1875 by the Presbyterian Church to serve as a ministerial training academy for Black men. It was renamed in 1899 — after the director whose idea it was to found the academy — Rev. Dr. Charles Allen Stillman.
By Karen L Edwards
IN YOUR COMMUNITY
Roof Raiser Anthony Mackie: A Superhero Helps Rebuild Gulf Region Communities
LEARN MORE

It's easy to think that there are as many roof types as there are buildings. In truth, there are only a few standard kinds and variations are made by combinations of these. The type of roof you select for your home or addition will influence a lot of other factors, including overall cost, what materials you can use, and how much of the roof is visible from the street.
By Dawn Killough
BUILDING SCIENCE
Doing it Right – How to Hold TPO Down During Application of Adhesive
LEARN MORE

Introduction We all recognize that, when properly installed, TPO can be part of a well performing roof system. However, a very simple error made during installation can set up the membrane for future issues. This has been known since early installations of TPO roofs but somehow it has been forgotten about by many installers. What are we talking about here? The use of adhesive buckets along a fold that causes premature cracking of the membrane years after installation. Let's dig deeper.
By Thomas J Taylor PhD
This blog contains information created by a variety of sources, including internal and third party writers. The opinions and views expressed do not necessarily represent those of GAF. The content is for informational purposes only. It is not intended to constitute financial, accounting, tax or legal advice. GAF does not guarantee the accuracy, reliability, and completeness of the information. In no event shall GAF be held responsible or liable for errors or omissions in the content or for the results, damages or losses caused by or in connection with the use of or reliance on the content.