Thermal insulation is an important part of commercial roofing assemblies. The aim of this article is to examine the factors influencing the thermal resistance, known as R-value of polyiso. The prediction of long term R-value and the influence of climate, i.e. temperature, have been of significant interest over the past few decades as building energy budgets have increased in importance. Recent discussions as to what R-value the designer should use and the importance of ambient temperature are reviewed and discussed.

Preventing water intrusion into the built environment during precipitation has always been regarded as the basic function of the roof. However, reducing heat flow through the building enclosure is a very important secondary function. Maintaining interior thermal comfort has always been an important part of residential construction, but it wasn't until the early 1970s that the use of thermally insulated steel roof decks became commonplace in commercial construction due to the need to lower building energy costs.

Polyisocyanurate thermal insulation, commonly referred to as polyiso, has proven to be popular due to a combination of its cost effectiveness (i.e. cost per insulation unit), efficiency (i.e. insulation value per unit thickness), and fire resistance, as compared to some competitive materials. Polyiso has recently come to represent over 75% of the commercial roof insulation market. However, as polyiso has grown in popularity, so has the interest in understanding a more exacting insulation value of this material. With rising energy costs it is more important to accurately specify heating, ventilation, and air conditioning equipment (HVAC). In addition, once a building is completed, it is important that the owner/occupier be able to better anticipate future energy costs from a budgetary perspective.

How Polyiso Is Made

With any foam insulation material, the process begins with the plastic or polymer precursor materials being in the liquid phase. Gaseous blowing agent(s) is introduced either by some form of injection into the process or through chemical reactions that create the polymer matrix. Initially, the blowing agent(s) is present as an extremely fine dispersion. In the case of polyiso, pentane is used as the blowing agent and during the subsequent development of the matrix, heat is released. The heat causes the dispersed pentane to expand, forming gaseous cells. Growth of these cells ultimately results in cell impingement, the entire process being indicated schematically below:

The characteristics of the windows and struts, such as thickness, size, and number, influence the overall thermal resistance of the foam along with the blowing gas composition as discussed later.

Key characteristics of polyiso are;

There are three ways in which heat can travel through a foam material, these being conduction, convection, and radiation, as shown schematically below; Conduction – closed cell foams, such as polyiso, consist of the polymer cells and the gas in those cells.

Convection is the heat transfer due to the bulk movement of molecules within fluids such as gases and liquids, from a hot surface towards a colder surface. In foams such as polyiso, the cells are too small for any convection to occur. Also, the temperature difference across each individual cell is too small to cause convection.

Radiation – thermal energy radiates from hot surfaces and is absorbed by materials depending on their opacity and thickness. Polyiso doesn't totally block thermal radiation; cell walls are considered to be too thin to absorb thermal radiation, however cell struts are thought to absorb and then re-radiate thermal energy. Manufacturers aim to make small cells, i.e. more cells per unit volume, to be more effective at blocking thermal radiation.

Insulation's Benefit for a Roof

Insulation has two main effects on heat flux into and out of a building. Polyiso is manufactured to meet the ASTM C1289 Standard Specification for Faced Rigid Cellular Polyisocyanurate Thermal Insulation Board. C1289 specifies the thermal resistance at a mean temperature of 75°F for various product thicknesses and requires that the values at 40 and 110°F be made available upon request.

The PIMA QualityMark™ program requires each manufacturing facility to submit to an annual verification of LTTR values. During verification, independent third-party representatives visit each facility and select a minimum of five boards for testing. The overall process is administered by FM Global. The results of a 2015 PIMA QualityMark verification testing are summarized below:

A total of 33 samples were tested for each thickness at a mean temperature of 75°F. These values, obtained from a third party independent process, are reassuring especially given the large number of samples involved (33 samples x 5 specimens = 165 tests). The PIMA Quality Mark program exists to ensure that member manufacturers are held accountable to produce product meeting published label values.

As noted earlier, the ASTM polyiso specification requires that the value at 75°F must be published and that values at 40 and 110°F be available on request. The mean reference temperatures for the ASHRAE Climate Zones for winter and summer conditions, assuming an indoor design temperature of 68°F are shown here: 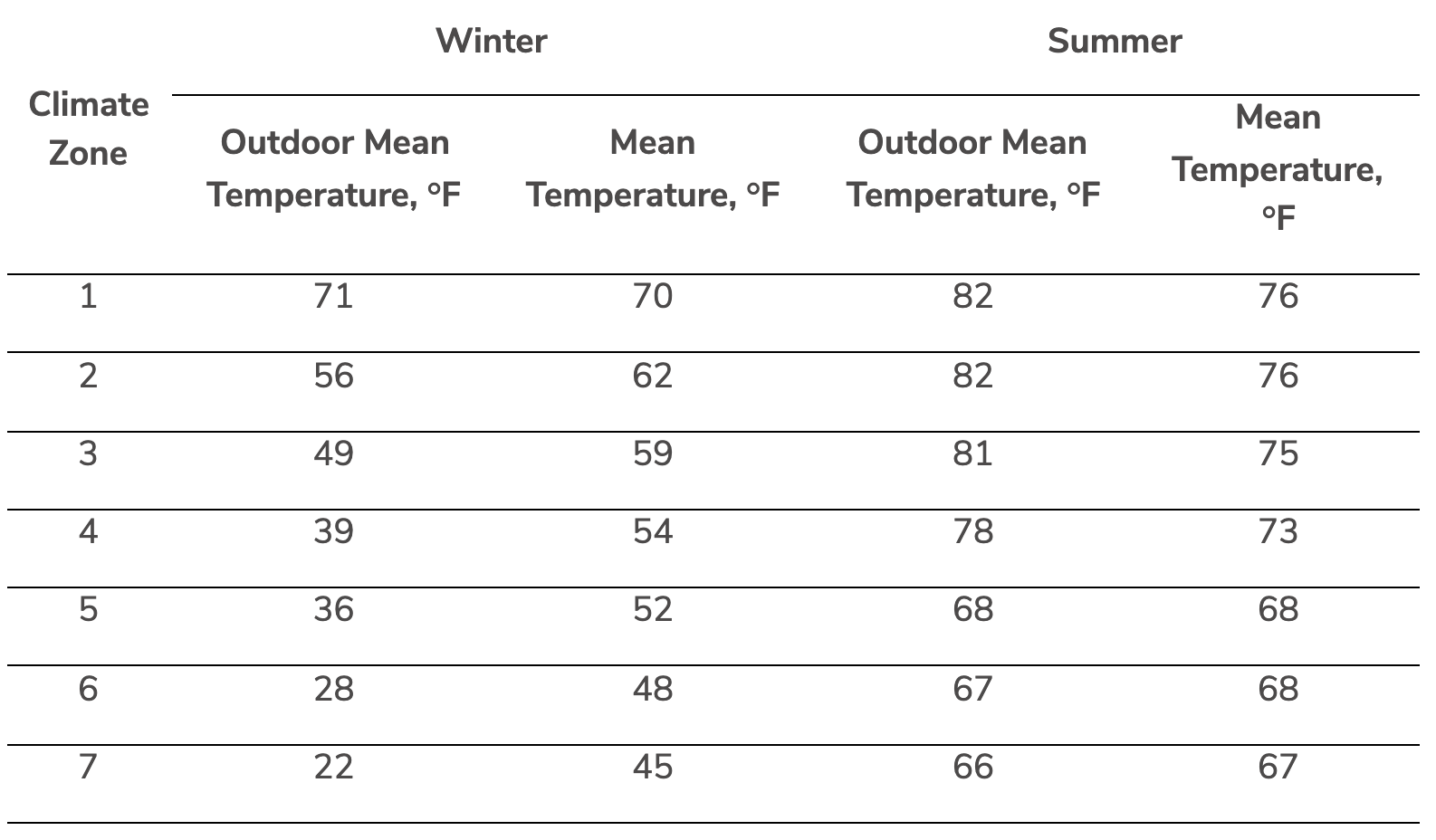 Also, electricity costs are about four times the cost of natural gas on a British Thermal Unit of energy equivalent basis. When specifying insulation, if gas heat is being used then summer air conditioning costs could dominate and the R-value at the 75°F mean temperature could be the most important.

While knowledge of a material's R-value is important to the commercial building market for the HVAC specifier and building owners/occupiers, home owners and individual consumers are generally unable to verify claims as to the thermal resistance. In the aftermath of the 1970's energy crisis, fraudulent R-value claims became so widespread the US Congress passed a consumer-protection law in response, the "R-Value Rule". The R-Value Rule "requires home insulation manufacturers, professional installers, new home sellers, and retailers to provide R-value information, based on the results of standard tests."

Polyiso is used as continuous insulation in residential wall systems and roof assemblies in many apartment and high rise condominium buildings. It is unfeasible for polyiso manufacturers to differentiate between products going into residential versus commercial applications. Therefore, in practice the R-Value Rule covers all polyiso meaning that labeled R-values are legally enforceable.


Want to learn more? See my recent article in Interface.

By Don Kilcoyne
LEARN MORE
Don't Miss
Another Post
Be on the lookout for updates from GAF Roof Views in your inbox.

Don't miss another GAF RoofViews post!
Be on the lookout for updates from GAF Roof Views in your inbox.
COMMERCIAL ROOFING
Using Self-Adhered Roof Membranes and Other Time-Saving Roofing Tips
LEARN MORE

Whether you're buying or selling a home, it's worth glancing at the roof warranty. For sellers, informing prospective buyers that the home's roof comes with a transferable warranty can boost the home's value. For buyers, knowing that the home's roof not only looks great but has a warranty might also provide some peace of mind.
By Wendy Helfenbaum
YOUR HOME
3 Reasons You Might Have an Attic Smell and How to Fix It
LEARN MORE

Just in case you needed telling, you should definitely take note if you detect a strong attic smell in your home! Firstly, in many cases, the unpleasant smells might begin infiltrating other areas of your residence. Secondly, and potentially much more serious, pervasive bad odors can be warning signs of other deeper issues. Whatever the cause (and there are many possibilities), when you detect a foul odor, it may be time to take a serious look at improving your attic ventilation. Below we'll take a look at some of the common causes of bad attic odors — and how having efficient, well-maintained attic ventilation can help prevent them.
By Mark Soto
YOUR HOME
DIY Roof Replacement — Is It Right for You?
LEARN MORE

In 1994, GAF's manufacturing plant in Shafter, California opened with a 19-year-old Ruben as an Operator on the original starting crew. While he only planned on staying for five years, Ruben remained on the Shafter team, holding various roles from Operator to Process End Leader to Shift Supervisor. He then took on more responsibility as Production Shift Lead for about five years. After his time on the line, Ruben then was granted an Electrical Apprenticeship, shifting the trajectory of his roles. He held positions as the Electrician Onsite, Electrical Team Lead, and Electrical Controls Specialist – a role he held for about seven years. He then was promoted to Senior Controls Specialist, until he most recently was selected as the Manager for GAF's new Incubation Center. In this role, he supports the hands-on installation, troubleshooting, and technology evaluation to accelerate innovation across GAF.
By GAF Roof Views
This blog contains information created by a variety of sources, including internal and third party writers. The opinions and views expressed do not necessarily represent those of GAF. The content is for informational purposes only. It is not intended to constitute financial, accounting, tax or legal advice. GAF does not guarantee the accuracy, reliability, and completeness of the information. In no event shall GAF be held responsible or liable for errors or omissions in the content or for the results, damages or losses caused by or in connection with the use of or reliance on the content.