He's the kind of roofer who won't tell his crew to tear off faster. Instead, he'll just sprint up the ladder with a shingle remover and set the pace himself. Setting a mind-boggling pace is a theme with Roy, whose company, Telge Roofing, of Cypress, Texas, recently replaced an 80-year-old VFW roof in about 14 hours, solving a problem that had festered for decades, and opening the door to a full renovation of the local landmark. That's just one reason we're calling Roy a GAF Roof Raiser.

What's surprising about Roy is that he's only been doing roofing for a relatively few years. After a diverse career that spans working in a grocery warehouse and the railroad, putting out fires, and owning multiple car dealerships, the Houston native took control of Telge Roofing in 2009. Since then, he's built it into a local Texas powerhouse, achieving GAF President's Club 2-Star status 4 years in a row, and installing, on average, more than 100 roofs a month with a crew of 113. The company, which serves a 60-mile radius around Cypress as well as Austin, maintains a Better Business Bureau rating of A+, and has been named Best Roofer in Cypress, earned Best of Living Magazine's Reader's Choice award 5 years in a row, as well as Next Door.

The secret to Telge Roofing's success is good old-fashioned commitment. Or, as Roy phrases it, "Stone-cold hustle."

"It's every day from 6:00 in the morning till 10:00 at night," he said. "The woman I date is very understanding — when a call comes in, I take it. I take every phone call seriously, whether it's a repair, a reroof, or just a question. I try to talk to everybody on a one-to-one basis. I want people to feel like they know the owner and trust that we're here before, during and after the next storm."

Honoring his hometown, Roy named his company "Telge Roofing" after the oldest road in Cypress. And he's now making that name more relevant by building a new Telge Roofing complex on an 8.1-acre Telge Road plot. The former horse training facility will feature a brand-new headquarters and warehouse. 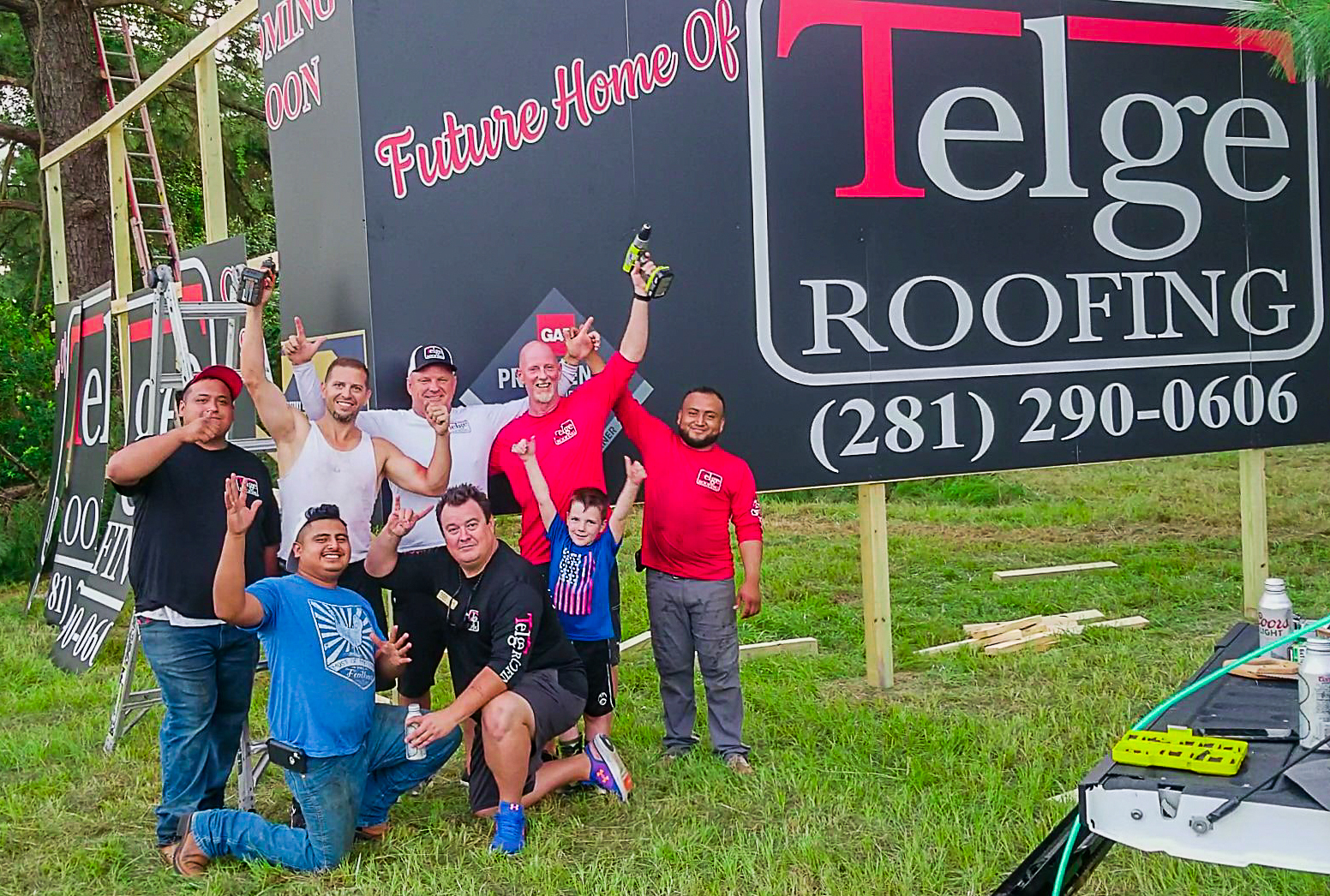 Answering prayers is just part of the job

Telge Roofing recently helped rebuild the aging VFW Post 8905, which was built in 1940, and suffered from the ravages of 80 years of Texas sun and storms. The new post commander, Joshua Wilcox, was determined to renovate the facility, and turn it into a community center serving all the residents of Cypress. But that dream would require a full remodel from floor to roof, and the Post simply did not have the funds. Without a new roof, all the interior work they had planned would be quickly ruined by pervasive leaks.

Post Commander Wilcox said he was literally praying for divine intervention. When he turned to a local business leader — Roy Campbell — to explore the possibilities, he felt his prayers had been answered. Roy agreed to donate the roof which totaled a $23,000 project.

True to his reputation for efficiency, Roy brought a Telge Roofing crew of 22 to the post and replaced the entire 80-year-old 60-square roof, including re-decking and new ice and synthetic layer shielding over the entire roof. Finally, the rebuilt roof was topped with new Timberline® HDZ™ shingles and new ridge vents all in one day. 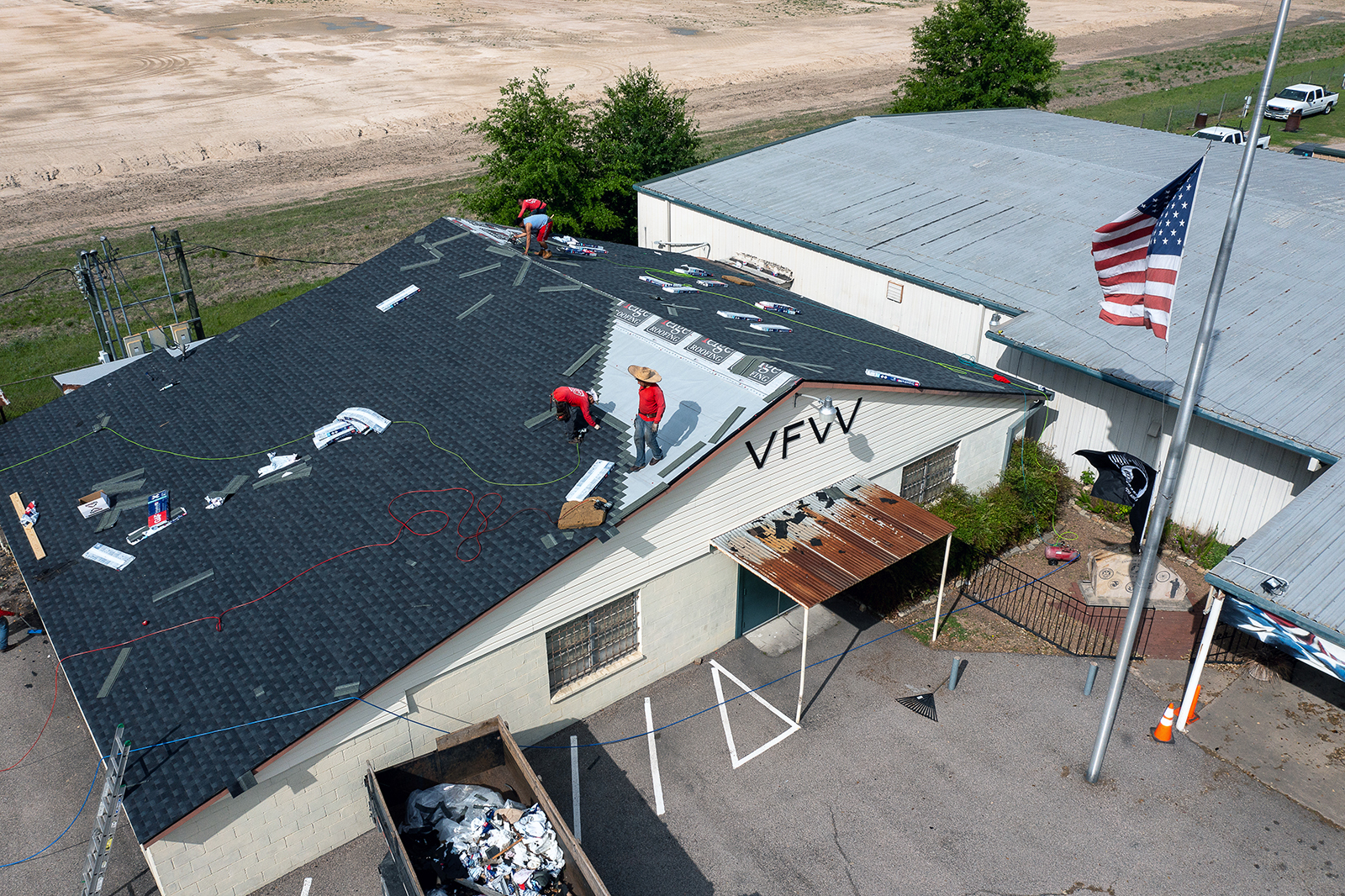 Reinvesting in his People

When Roy isn't sprinting to a meeting or climbing up a ladder, he likes to treat his whole crew to catered meetings where he shares not only his philosophy and plans, but the fruits of his GAF Rewards membership. His system is simple. Anyone who shows up for the meeting on time gets their name dropped into a bucket. Roy draws names and hands out between $1,800 and $2,000 in Rewards gift cards. "So, who goes into a company meeting and there's $2,000 given away just for showing up?" Roy laughed. "But the point is, the money that comes from GAF Rewards? I reinvest it back into the system for the guys."

"I'm of the generation that can appreciate the fact that there's a steamroller right behind you," he said. "Hard work, old school principles, and keeping focused, keeps you ahead of it. You can be a hero today, and a zero tomorrow, but every day is a new opportunity to be that hero and outrun that steamroller."

It used to be that you didn't see many women in roofing. That's slowly changing. Although women in roofing currently make up less than roughly half a percent of all roofing professionals in the United States, that narrow slice represents a growing number of women in the industry.
By Karen L Edwards
LATEST UPDATES
YOUR HOME
Should You Have a Roof Inspection Before Buying a House?
LEARN MORE

Buying a home is the biggest financial investment many people will make. In a hot real estate market, homebuyers may be tempted to remove any conditions from their offer to purchase—including a roof inspection—so their bid wins the house.
By Wendy Helfenbaum
YOUR HOME
What Is a Mansard Roof?
LEARN MORE

A mansard roof is one of the more unique styles of roof, especially in a residential setting. Beyond its aesthetic, it offers a set of benefits that other roofs can't match—however, it also comes with some special considerations. On the right home, mansard roofs can provide both style and protection for you and your family.
By Mark Soto
YOUR HOME
What Is a Gambrel Roof?
LEARN MORE

Gambrel roofs, also commonly called barn roofs, are common across America. Brought over by the Dutch, some of the earliest gambrel roofs in America were found in buildings from the 16th century. Today, they fit in perfectly with the resurgence of the farmhouse style.
By Dawn Killough
BUILDING SCIENCE
Overburden
LEARN MORE

Since its inception a roof's primary purpose has been to shelter its inhabitants from the elements, but now the underutilized potential of roof surfaces is being realized. For roofs with large surface areas, the potential for large overburden installations, such as solar, vegetative roofing, or amenity decks can be exceptional. Even smaller roofs can have overburden that make a significant impact on the sustainability goals of a building including: increased energy efficiency, stormwater retention, energy generation, biohabitat restoration, food production, reduced urban heat island effect, and outdoor space.
By Kristin M Westover PE
COMMERCIAL ROOFING
Commercial vs Residential Roofing: What Are the Differences?
LEARN MORE

Every roof is different, and that's especially true when comparing commercial vs residential roofing, also known as low-slope vs steep-slope roofing. Many roofing contractors start out installing residential roofs because they have a low cost of entry. The process requires minimal specialized equipment—most roofers are able to start out with a truck, a ladder, a nail gun, a compressor, and safety gear.
By Karen L Edwards
RESIDENTIAL ROOFING
5 Ways for Roofers to Celebrate Vets Beyond Veterans Day
LEARN MORE

Roofers, are you ready? Here's your chance to help protect veterans who have protected our country. As a roofer, you know that a reliable roof protects what matters most. You're also uniquely qualified to support our troops by ensuring their homes and families are covered.
By Annie Crawford
This blog contains information created by a variety of sources, including internal and third party writers. The opinions and views expressed do not necessarily represent those of GAF. The content is for informational purposes only. It is not intended to constitute financial, accounting, tax or legal advice. GAF does not guarantee the accuracy, reliability, and completeness of the information. In no event shall GAF be held responsible or liable for errors or omissions in the content or for the results, damages or losses caused by or in connection with the use of or reliance on the content.