Around the globe, excess heat collects in urban areas and can contribute to increased heat-related death and illness, diminished quality of life, and reduced economic opportunities. Such areas are known as "urban heat islands." Fortunately, cooling strategies are now available and being used in initiatives like the GAF Cool Community project to help mitigate urban heat island effects. Such cooling strategies are supported by products such as such as GAF StreetBond® pavement coatings with Invisible Shade™ — named by TIME magazine as one of its Best Inventions of 2022.

You can envision urban heat islands as heat-saturated sponges spread out across vast, shimmering urban spaces. These "islands" tend to have minimal shady vegetation, so their blacktop and hard surfaces — such as pavements, parking lots, concrete recreation areas, and roofs — absorb and retain the sun's heat well into the evening. HEAT.gov explains that temperatures in urban heat islands can be 15–20°F hotter than in equivalent vegetated areas. In technical terms, darker surfaces have a low albedo effect — that is, the ability to reflect and diffuse the sun's rays back to the upper atmosphere. This means highly reflective, snow-covered regions such as the Arctic have high albedo, while dark, tarmac-covered cities have low albedo, which leads to increased heat retention.

Densely packed buildings compound a low albedo effect by preventing cooling breezes from lowering temperatures. And to top it all off, heat islands can trap waste heat from cars, air conditioners, and other heat-emitting devices — exacerbating the effects. In terms of detrimental environmental impacts, this is the perfect, overheated, storm.

L.A.'s Pacoima neighborhood is one example of a community hit hard by heat. Undoubtedly a true urban heat island, it is consistently one of the city's hottest areas: one summer afternoon, Bloomberg News reported a pavement temperature of 127°F at noon — which rose to 141.8°F just one hour later. In addition, many of Pacoima's residents are in lower-income brackets and living in spaces that have not been fully optimized to mitigate heat island effects. According to Miguel Angel Luna, president of Urban Semillas, Pacoima residents are right "on the front line of climate change." Urban Semillas is an L.A.-based social and environmental justice consultancy working with grassroots organizations such as Pacoima Beautiful on the GAF Cool Community Project in the area.

More than 80% of Americans live in urban areas, where urban heat islands are most prevalent. Extreme heat has been the greatest weather-related cause of death in the US for the last 30 years, according to Forbes. Roughly 12,000 Americans died prematurely from extreme heat between 2010 and 2020, with Native American and Black communities disproportionately affected.

And within those urban areas, it is the lower-income neighborhoods — often with fewer trees or other cooling interventions — that tend to be hardest hit. For example, Bloomberg noted that during days of extreme temperatures, Pacoima had seven times the number of excess heat emergency room visits (19,000 between 2009 and 2018) compared with nearby Santa Monica in L.A., an affluent community of similar size.

The GAF Cool Community project in Pacoima addresses the complex issue of urban heating with a beautifully simple solution. Take a hot, sun-exposed community with an abundance of heat-retaining hard surfaces. Then, apply colorful, solar-reflective coating to its streets and public hardscaping. The result? Cooler pavement temperatures. 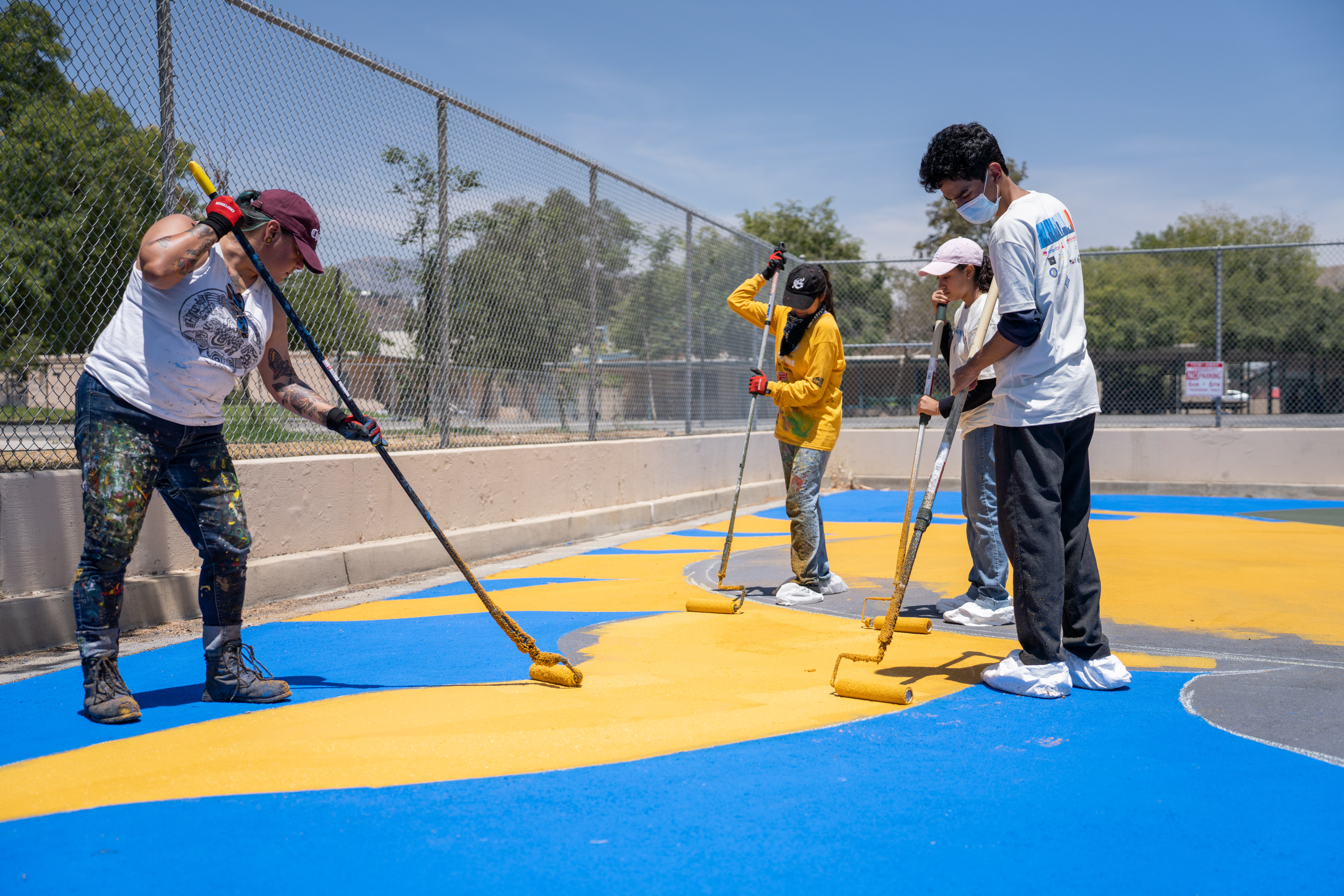 The solar reflective coating — StreetBond pavement coatings with Invisible Shade™ technology — can help reduce surface temperatures by between 10°–12°F in the heat of the day. This could ultimately reduce ambient temperatures around Pacoima, explained Jeff Terry, Vice President of Sustainability at GAF, to Forbes.

Approximately a million square feet have been coated with StreetBond® solar-reflective epoxy acrylic coating over a 10-block area. An attractive, colorful mural of solar-reflective materials covers the park area, and blue-and-white StreetBond® brightens the public basketball court. The formerly dark streets are now a cool grey-blue. 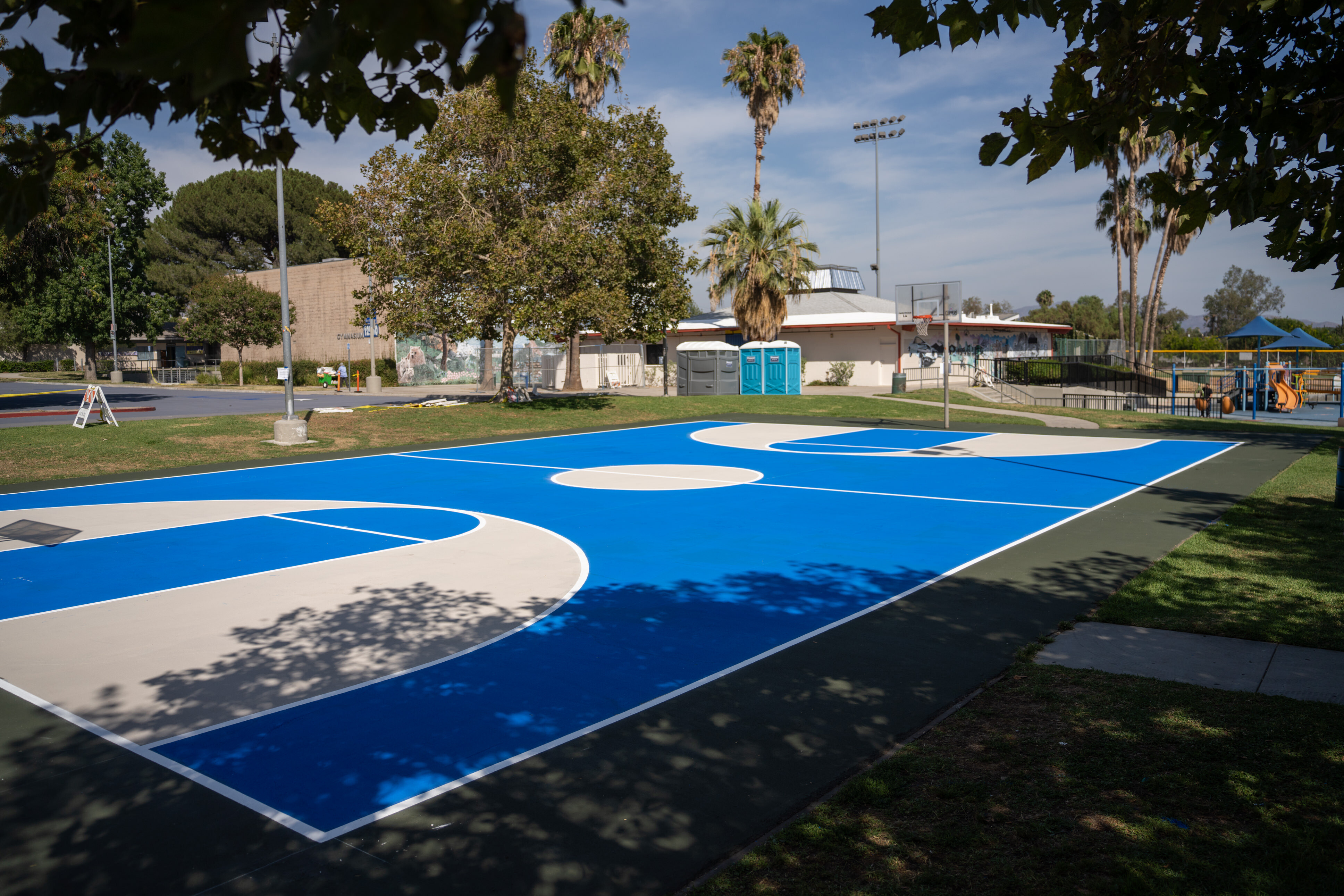 Over 12 months, the project will track pavement and air temperatures using sensors, satellite technology, and drones. The second project phase may also include cool roofs. The goal of the project is to determine whether these cooling strategies can help reduce overall ambient temperatures outdoors and offset high indoor temperatures caused by a lack of air conditioning in the Pacoima community.

GAF and its partners aim to improve the lives of the roughly 2,000 people in the half-mile project range, plus have the solutions — including what Jeff Terry sees as a "complete community approach" that involves residents and local organizations — which serves as a model for cities around the world. In addition to urban beautification and heat reduction, GAF StreetBond® can help preserve pavement. In turn, longer-lasting pavement can save cities time, money, and resources and gives them another tool to help mitigate the impacts of climate change.

Whether urban or rural, all communities can use technology to help reduce indoor and outdoor temperatures. Some cooling strategies that can be effective across cities or in your own home include:

Ready to get started in your neighborhood? Check out the inspiring community improvement projects at streetbond.com. (A division of GAF, StreetBond® offers the same quality and reliability customers have come to rely on from North America's largest roofing and waterproofing manufacturer.)

** Potential for savings depends on various factors including, but not limited to, climate zone, utility rates, location, and HVAC equipment efficiency.

Ventilation is defined by the U.S. Department of Energy as "the exchange of indoor and outdoor air." This sounds simple enough, but if your home's attic is not properly ventilated, excess heat and moisture cannot escape and can lead to a plethora of concerns for your home, your roof, and your wallet.
By Karen L Edwards
IN YOUR COMMUNITY
Roof Raiser Anthony Mackie: A Superhero Helps Rebuild Gulf Region Communities
LEARN MORE

It's easy to think that there are as many roof types as there are buildings. In truth, there are only a few standard kinds and variations are made by combinations of these. The type of roof you select for your home or addition will influence a lot of other factors, including overall cost, what materials you can use, and how much of the roof is visible from the street.
By Dawn Killough
LATEST UPDATES
YOUR HOME
Common Attic Ventilation System Solutions by Roof Style
LEARN MORE

Ventilation is defined by the U.S. Department of Energy as "the exchange of indoor and outdoor air." This sounds simple enough, but if your home's attic is not properly ventilated, excess heat and moisture cannot escape and can lead to a plethora of concerns for your home, your roof, and your wallet.
By Karen L Edwards
BUILDING SCIENCE
Defending Against Very Severe Hail
LEARN MORE

Think that your roof doesn't need protection against hail? Think again. Severe hail events are increasing in geographic footprint and are no longer just in hail alley. The geographic region that experiences 1 inch or larger hailstones has expanded to be nearly two-thirds of the United States. Nearly 10 percent more U.S. properties, more than 6.8 million, were affected by hail in 2021 than in 2020. Coinciding with the increase in properties affected by a damaging hail event in 2021, there was also an increase in insurance claims, which rose to $16.5 billion from $14.2 billion in 2020.
By Kristin M Westover PE
RESIDENTIAL ROOFING
What Is It Like to Be a Roofer?
LEARN MORE

To get a firsthand account of what it's like to be a roofer, GAF spoke with Trenton Wisecup, president of Arrow Roofing Services in Michigan, and David Laurain, Arrow Roofing's vice president, to learn about their experiences in the roofing industry.
By Dawn Killough
COMMERCIAL ROOFING
How Commercial Skylights Can Boost Revenue
LEARN MORE

Around the globe, excess heat collects in urban areas and can contribute to increased heat-related death and illness, diminished quality of life, and reduced economic opportunities. Such areas are known as "urban heat islands." Fortunately, cooling strategies are now available and being used in initiatives like the GAF Cool Community project to help mitigate urban heat island effects. Such cooling strategies are supported by products such as such as GAF StreetBond® pavement coatings with Invisible Shade™ — named by TIME magazine as one of its Best Inventions of 2022.
By Annie Crawford
IN YOUR COMMUNITY
Helping Stillman College Breathe New Life into a Historic Building
LEARN MORE

The GAF manufacturing plant in Tuscaloosa, Alabama sits just a half mile away from Stillman College, a historically Black university with a rich history in the area. The school was first formed as the Tuscaloosa Institute in 1875 by the Presbyterian Church to serve as a ministerial training academy for Black men. It was renamed in 1899 — after the director whose idea it was to found the academy — Rev. Dr. Charles Allen Stillman.
By Karen L Edwards
This blog contains information created by a variety of sources, including internal and third party writers. The opinions and views expressed do not necessarily represent those of GAF. The content is for informational purposes only. It is not intended to constitute financial, accounting, tax or legal advice. GAF does not guarantee the accuracy, reliability, and completeness of the information. In no event shall GAF be held responsible or liable for errors or omissions in the content or for the results, damages or losses caused by or in connection with the use of or reliance on the content.