Roof Raisers: Celebrating Thanks and Giving with Straight Line Construction

Few days inspire us to pause and reflect the way Thanksgiving does. The final Thursday of each November, millions of Americans sit down with friends and family to acknowledge our blessings. And while most of us focus on the "thanks" part of the day, some find just as much inspiration in the second half of the word: "giving."

That's why, this month, GAF Roof Raisers salutes GAF Master Elite® Contractors Jack Borba and Straight Line Construction of Shingle Springs, California. For the thirteenth straight year, Jack and Straight Line have hosted the Thanks and Giving customer appreciation party — a community gala that has created more than $1,000,000 in purchasing power for the Food Bank of El Dorado County. The 13th annual Thanks and Giving party was held on Saturday, November 9, and featured more than $6,000 worth of donated raffle prizes, live music, and great food. They raised a record $26,000 in direct donations, enabling over $180,000 in food to be purchased for the local community. 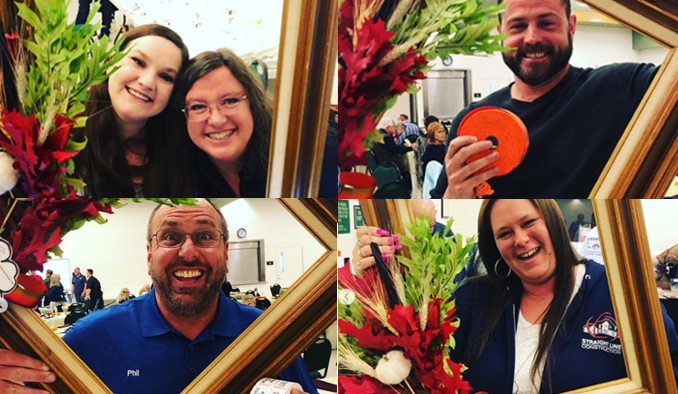 Can you picture yourself raising funds for a food bank? Courtesy Straightline Construction

Because of the Food Bank's unique ability to purchase food at steep discounts, donations made through events like the Thanks and Giving dinner multiply dramatically in value. Straight Line matches all raffle ticket purchases, doubling every dollar donated. Then, the Food Bank is able to buy about $7 worth of food for every dollar. Effectively, every dollar donated equals $14 in food purchasing power.

Recognizing his blessings is as much a part of Jack's character as his love of building. He's a third-generation contractor with a legacy going back 70 years. His grandfather started a construction company in the 1950s. His dad followed suit in the 1970s, and Jack launched Straight Line in the 1990s. All three companies are still in business.

Jack grew up, with his three younger brothers, in a two-bedroom mobile home that his parents had parked on a 10-acre property in the foothills of Sacramento. His dad logged the property, hand-milled the timber, and built a mission-style house from the ground up. "It took many years. We finally moved in when I was 13," said Jack. "But it was so cool to see this house kind of grow in the backyard. In my mind it was like this castle. And so, when we finally moved in, it was just concrete floors, no carpets, and stuff. Even though it was unfinished, I had fallen in love with construction watching it rise, and all of my brothers did as well."

Jack's dad started grooming him to continue in the family trade at a very young age. "My dad put me up on a little tear-off when I was, like, seven years old," said Jack. There was a section of roof under an overhang that no one else could fit into, so up Jack and his brother went. "We tore that little piece off, and I guess that was my start, right there!"

His dad was also an educator, teaching entrepreneurial classes at local schools. Jack attended the classes and was able to start two businesses for himself by the age of 13. "The first one was a pony ride business, up in the Apple Hill Market. It was pretty cool," he said. "I sold my first horse and bought six ponies. And I got to file my first tax returns when I was 14!"

Around the same time, Jack also started a landscaping business. His first customer was a local woman who hired him to do weeding and lawn mowing. Ten years later, her daughter hired him to install one of his first roofs. And 10 years after that, when Straight Line was contracted to roof a large apartment complex, Jack asked the owner where she got his name. "Oh, you know that lady you did the lawn work for?" she replied. "That was my grandma. And the lady you did that first roof for? That was my mom. And now you're doing my apartment complex."

"It's kind of crazy," Jack reflected, "how your history can come back to bless you."

Straight Line — a Brand Name and a Point of View

Aside from hard work and striving to get it right, there's no true "secret" to Straight Line's success. But there is a clue hiding in plain sight: the name "Straight Line." Jack explained that his dad and grandfather have always been fanatical about using chalk lines, truing things up, and making sure everything on the job was as precise as possible. When young Jack and his teen-aged friends had worked with other roofers, the other guys made fun of the good habits they'd learned. They said they didn't need to rely on "straight lines." Jack told them, "Well, when we start our business we're going to call it 'Straight Line.'" And so he did.

In the beginning, "Straight Line" was known for their dependability — showing up on time, truing up their work when others were eyeballing everything, and creating professional estimates when their competitors were still jotting down numbers on napkins. Today, as a company of 70, it also stands for having the right personnel in place, utilizing the Entrepreneurial Operating System for systematic business growth, and giving back to the community in which they have thrived.

The same passion for excellence that earned two teenagers ridicule now earns the company five-star reviews. "Today, it's about being quality focused and doing the right thing by your customers," said Jack. "And if that means it costs more and that comes out of your pocket, you do that."

It's no wonder Jack considers himself amply blessed. He's the protege of successful contractors. Raised to love hard work and be fanatical about quality. And through his hard work and the good example he observed in others, he was able to buy his own home by age 20. And today, through his company and the Thanks and Giving party, he's sharing those blessings with his employees, customers, and the homeless community of El Dorado County.

This Thanksgiving, we hope all of our readers have the good fortune to be safe and dry, surrounded by family and friends. For those who are not so fortunate, our hope is that someone in your community is as committed to giving as our Roof Raisers, Jack Borba and the good folks at Straight Line Construction.