In 2011, employees at the GAF Chester plant in Rock Hill, South Carolina had an idea to reduce waste being generated by the manufacturing facility. The initial idea has grown into a model of collaboration and innovation: reusing cardboard mat cores.

In the past, once customer plants used up the mat core, the cardboard was simply thrown away—until Mark McAteer, plant manager at the GAF Chester location, and his team decided to begin reusing them. They began marking the cardboard cores as they came back to the Chester plant, and quickly discovered that many could be reused between four and six times. Now, fresh fiberglass mat is wound onto the reused tube, explains McAteer.

"Not only did it save us money, but it was the right thing to do, so we don't leave this problem to future generations," says McAteer.

Soon, four GAF shingle manufacturing plants, Tampa, Florida; Myerstown, Pennsylvania; Baltimore, Maryland; and Tuscaloosa, Alabama, were participating in the initiative by sending their mat cores back to Chester to be reused. 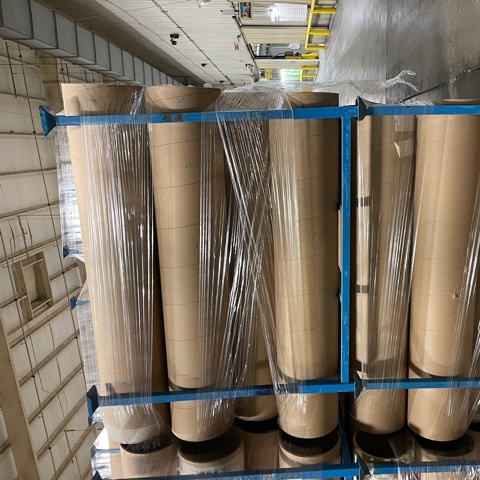 A Step Toward Protecting the Planet

The mat core reuse initiative was the perfect way to springboard the expansion of waste diversion efforts at GAF while also streamlining the process for customers to participate. When this initiative began, the mat cores were sent back to the plant on pallets. This could prove difficult, since they had to be wrapped in plastic and would sometimes fall over.

"We invested in metal racks and encouraged our customers to send them all back to us no matter what they looked like, because in most of the plants, they don't have the recyclers that we have," says McAteer.

Customers now receive empty metal racks. Once they've consumed the mat, they trim off the excess fiberglass from the core and stack the cores in the racks. When there's enough for a truckload, the mat cores are shipped back to the Chester plant. The crew checks them over back at the plant to assess their condition—if they're in good shape, they're reused.

The plants also invested in a core cutter for the cardboard; if any ends are damaged, the mat cores can be cut to shorter lengths and used on projects of different sizes ranging from 33 to 72 inches. If they're too damaged to reuse, the mat cores are piled onto a trailer and taken to a cardboard recycler, where they get ground up and recycled into other products.

Each core weighs about 22 pounds; McAteer estimates the plants divert close to 50,000 pounds of cardboard per month from landfills.

Since focusing on waste diversion efforts at GAF manufacturing plants, new ideas keep cropping up. For example, the fiberglass comes in large cardboard boxes with plastic bag liners. Those bags get would typically get tossed into a compactor, which got emptied at least twice a week—after which, all that plastic got put into the ground.

The Chester team had a new idea. "We found a local plastic recycler that drops off a trailer. Now we place all those empty bags onto it, and they haul them off to be recycled once every quarter," McAteer explains.

Plant teams also recycle cardboard boxes, partnering with the vendor that supplies GAF with its fiberglass. Employees at the Chester plant recycle pallets as well, sending them back to the supplier rather than to a landfill. A local business picks up, disassembles, and reassembles the damaged ones so they can be used again. Plant employees have even found ways to recycle product waste: McAteer says they've found customers that buy and use some of the scrap fiberglass mat.

"We sell some and give away some, so while we don't really make any money on it, we're not paying to put it in the landfill," he says.

McAteer says GAF plants in Indiana, Texas, and California are all exploring ways to ramp up their waste diversion efforts. He hopes to add the plant in Minneapolis to the mat core program once they find a freight partner.

Learn more about GAF's commitment to reduce its environmental impact and promote sustainability across all areas of its business here.