Each energy production type, such as coal and solar, has a range of costs depending on location, the efficiency of the particular equipment used, etc. Today the range of costs of photovoltaic — or solar —power now overlap those of conventional sources of electricity as shown in the following graphic (2021 data courtesy of Lazard).

To better compare true costs, the data shown above does not include any tax or other subsidies. The term "Levelized Cost" is defined as an economic assessment of the average total cost to build and operate a power-generating asset over its lifetime divided by the total energy output of the asset over that lifetime. It includes initial capital, as well as maintenance, operating, and fuel costs. It is the breakeven cost without any margins for profit.

The power cost of solar C & I varies between $85 and $194 per megawatt hour, or MWh. The design and engineering of such rooftop solar arrays are now highly specialized with a focus on increasing performance (i.e., output or production) and lowering costs. A key metric is the energy density, or energy production per unit area, which will be examined in detail here together with the expected productive life of such installations. Energy density and overall life cycle are important drivers of levelized cost. Some specific parameters vary depending on whether an array is comprised of standard solar panels or bifacial panels. These are discussed separately.

The array design plays a key role in determining energy density. For maximum power production per panel, the array orientation is directly perpendicular to the sun's energy. This results from having south-facing panels angled at 30° (for southern US locations) as shown here: 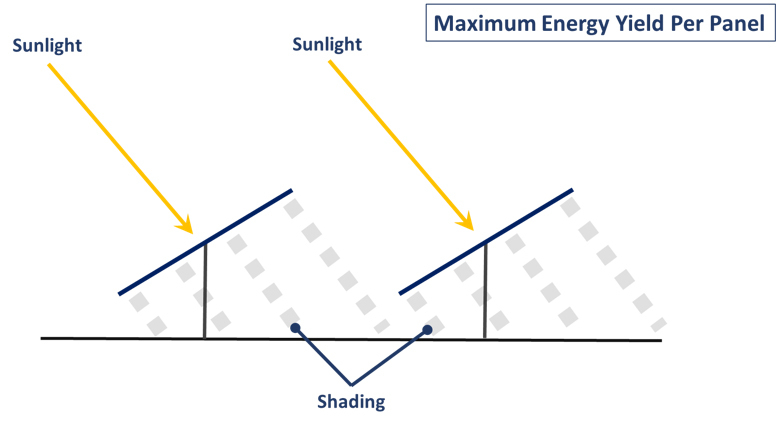 However, this arrangement doesn't maximize the number of panels that can be mounted in a given area. In other words, the energy density isn't maximized. The following schematic shows the panels closer together, but at a less optimum angle to the sun. The panels are at a lower angle to avoid shading and so there is a trade-off between maximizing power from each individual panel versus that of the entire installation. 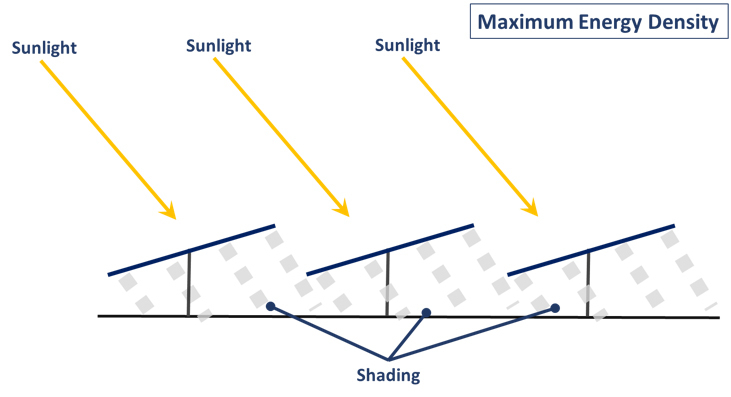 Of course, the sun's angle changes with location, time of day and throughout the year. However, solar system designers now model an array's output to maximize the annualized energy density for each specific location.

If an array is oriented directly south, then power output would rise during the day as the sun rose in the sky. Peak power would be produced between noon and 1pm when the sun is most directly overhead, after which it would taper off. This might seem optimal but there are two situations that could change that perspective: 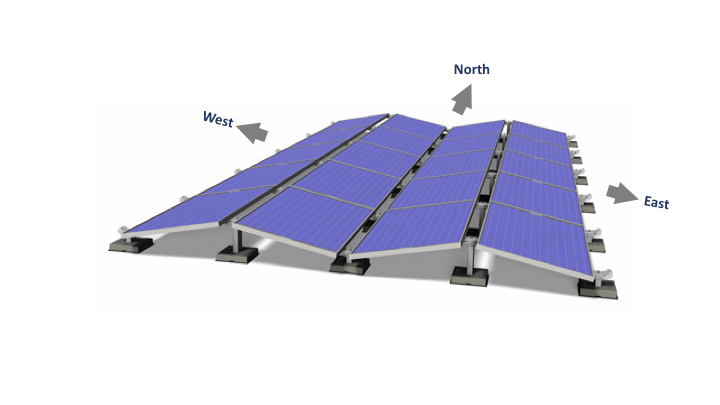 Daily energy output from such a configuration, compared to that of a more conventional south facing array is shown in the following plot: 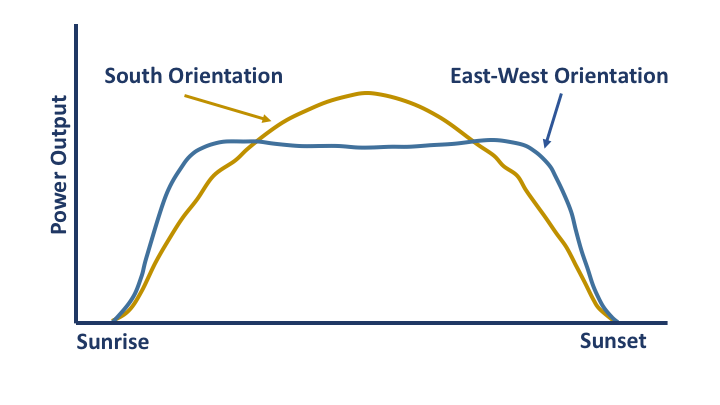 Examination of the east-west panel arrangement suggests that energy density, while not maximized, could be fairly high. Such an installation essentially avoids shading except around sunrise and sunset.

As described earlier, levelized cost calculations assume a certain lifetime during which the asset will produce power. In the case of the data shown in the initial graph, solar arrays were assumed to have a twenty year lifespan. There is some evidence that most solar panel failures occur during the initial years of operation, as manufacturing defects and the like cause breakdowns. However, once those few defective panels have been replaced, there is significant anecdotal evidence that arrays can produce useful power for several decades.

Inverters, which are necessary to convert an array's direct current to alternating current, may also experience initial failures due to manufacturing and wiring defects. Inverters may also experience longer-term failures, but as inverter costs continue to fall, replacement/repair of these devices becomes part of regular system maintenance.

Roof membrane life can be a significant factor in determining the long term economic life of a solar C & I installation. If the membrane requires replacement, the cost of removing and then re-installing the array could prove to be prohibitive. GAF EverGuard Extreme® TPO was developed for demanding installations and for those situations where a longer roof service life was desired. With guarantee coverage available up to 35 years (depending on installation method and membrane thickness) and exceptional accelerated weathering performance, the long term risk of failure is lower for GAF EverGuard Extreme® TPO than for other TPO membranes. 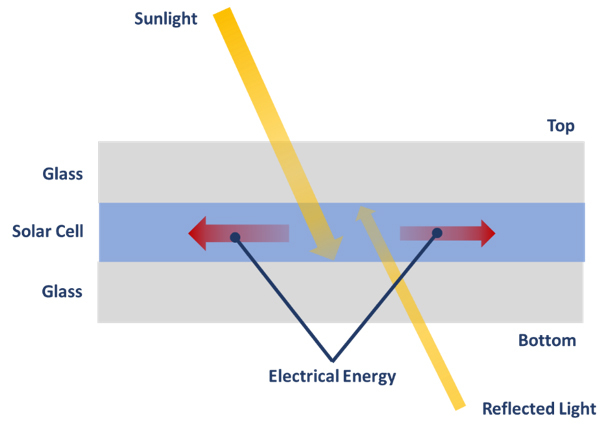 Bifacial panels should be installed above highly reflective surfaces, as shown here: 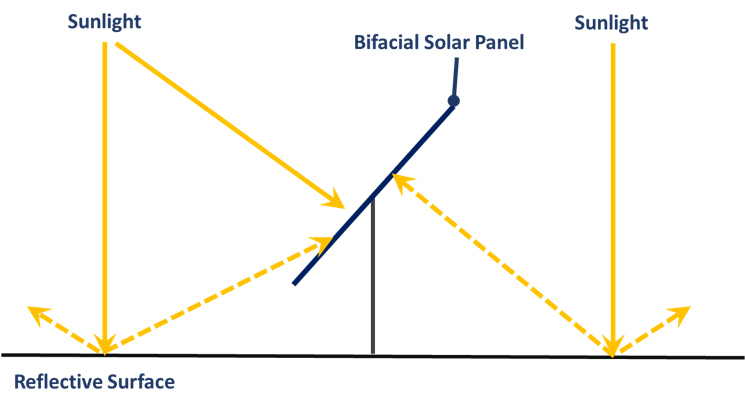 It is important to ensure that the underlying substrate is not shaded too much. In fact, bifacial modules require a different set of considerations to maximize power density as compared to the conventional panels discussed above. There are three factors that can increase the energy production of a bifacial installation: the module height above the membrane, the tilt angle, and module row-to-row spacing.

Module height is important because of its relationship with shading of the membrane. As the following schematic suggests, modules that are further above a highly reflective membrane will produce more energy than those closer. 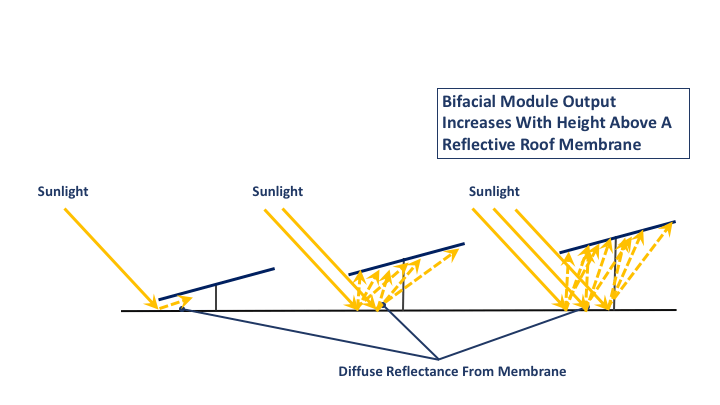 Design guidelines such as those provided by LG* and Prism* suggest the following relationship between height, measured to the lowest point, and bifacial energy gain. 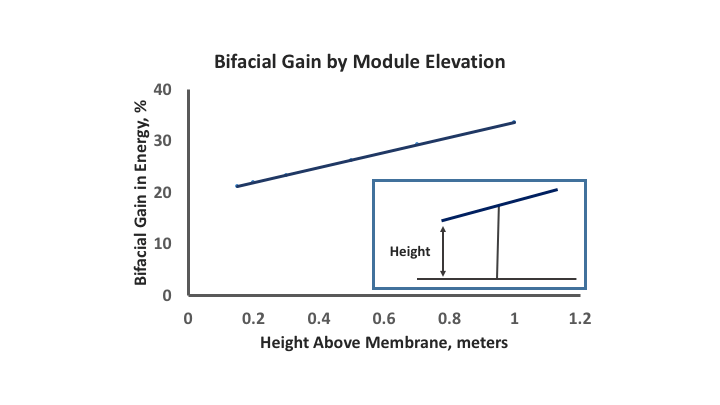 The array designer will need to balance factors like wind resistance and cost against the potential energy gain. In most situations, it would be wise to keep the modules at or below the parapet wall height to minimize wind loads.

As with standard modules, the tilt angle of bifacial panels can be increased to maximize energy density, but membrane coverage must be considered. This is best explained by referring to the following schematic. 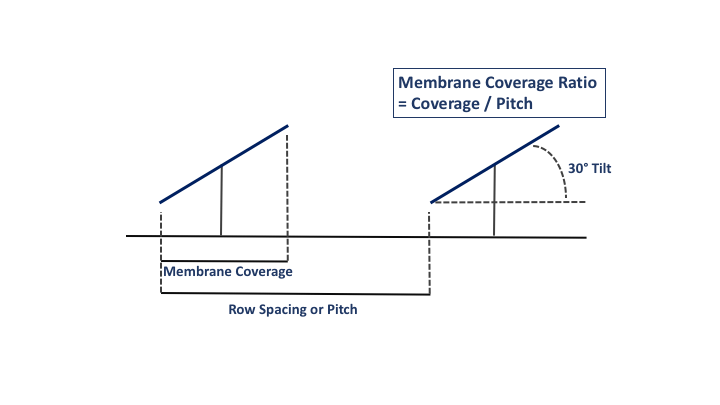 Standard module rows can be closely spaced, with the limiting factor being the degree of shading of the modules themselves. With bifacial modules, shading of the membrane is the limiting factor. As with module height, the bifacial gain in energy can be modeled as a function of membrane coverage ratio. The following graphic shows a generalized response for a bifacial module with a high rear side efficiency: 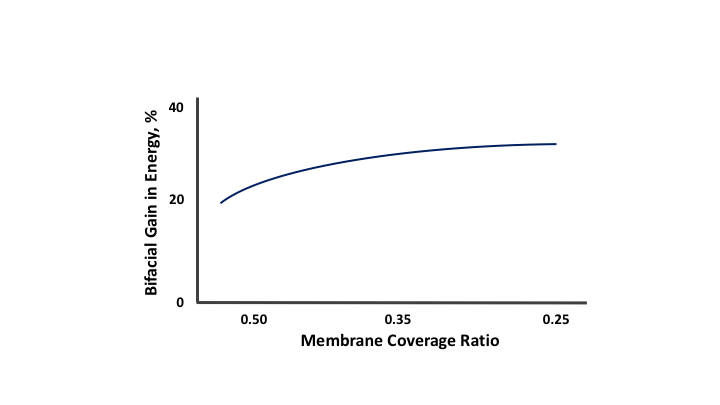 As stated earlier, the output of bifacial solar panels is dependent on the reflectivity of the substrate. In the case of TPO single ply roofing membranes, there are generally only minor differences between TPO membranes from different manufacturers in terms of initial reflectance. The critical measure is solar reflectance since it is visible light that provides energy for conversion to electricity. Solar Reflectance Index, or SRI, is not appropriate because it includes an emittance term which is a measure of heat being radiated from the surface.

Many in the solar industry use albedo as a measure of reflectance, instead of solar reflectance used by the roofing industry. In practice, the two measures are very similar, with albedo being a total spectrum reflectance while solar reflectance is primarily measured across the visible region of the sun's energy. The following chart shows the bifacial energy gain as a function of roof albedo, using data from LG*. 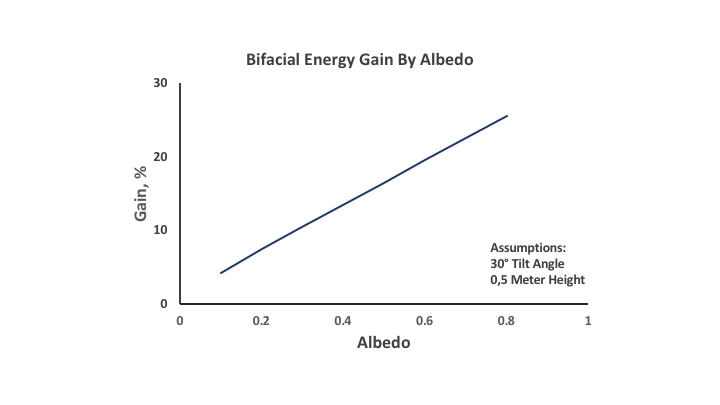 Clearly, high albedo or solar reflectance increases the energy output from bifacial modules in a solar C&I application. It is thus beneficial to have a membrane like GAF EverGuard Extreme® TPO, which has the potential to maintain a high reflectance. As discussed in the previous blog, TPO generally can maintain a higher level of reflectance versus other membrane types, but also GAF EverGuard Extreme® TPO in particular could resist dirt pick-up for a longer time than other TPO membranes.

For bifacial module installations, membrane life is as important as for standard solar modules, i.e., a long system life can lower the levelized cost of energy. This can then contribute to levelized costs that are more competitive versus conventional energy sources.

*Trade and company names or company products referred to herein are intended only to describe the materials and products discussed. In no case do these references imply recommendation or endorsement, nor do they imply that the particular products are the best available for the purpose discussed.

By Don Kilcoyne
LEARN MORE
Don't Miss
Another Post
Be on the lookout for updates from GAF Roof Views in your inbox.
Don't miss another GAF RoofViews post!
IN YOUR COMMUNITY
Sustainability Beyond Sustainable Roofing Products
LEARN MORE

It used to be that you didn't see many women in roofing. That's slowly changing. Although women in roofing currently make up less than roughly half a percent of all roofing professionals in the United States, that narrow slice represents a growing number of women in the industry.
By Karen L Edwards
LATEST UPDATES
YOUR HOME
Roof Shingle Color Trends for 2022
LEARN MORE

Roofing renovations were a top exterior upgrade in 2021, and continue to dominate the home improvement market in 2022. As you might plan to renovate or replace your roof, it makes sense to also think about what roof shingle color you should choose.
By Annie Crawford
YOUR HOME
Choosing the Right House and Roof Color Combination
LEARN MORE

An attractive house and roof color combination can give your home a major boost in curb appeal. Not only does adding visual appeal make the place feel like it's yours, but it also brings a higher resale value. On average, homes considered to have curb appeal sell for 7% to 14% more than similar homes with less visual appeal, according to the Journal of Real Estate Finance and Economics.
By Annie Crawford
IN YOUR COMMUNITY
Sustainability Beyond Sustainable Roofing Products
LEARN MORE

At GAF, our commitment to protect what matters most means more than manufacturing sustainable roofing products. It includes investing in our people, our planet and our business so we can work toward a more sustainable future.
By GAF Roof Views
COMMERCIAL ROOFING
Protecting Your Building from Hail Roof Damage
LEARN MORE

Up to 25% of the United States experiences large hail episodes—and when they do, hail can cause severe damage to roofs and the HVAC equipment stored there. Hailstorms account for 70% of the average annual property losses from severe convective storms in the US. Building owners can protect their buildings and equipment by designing their buildings and roofs to withstand the damage caused by large hailstones.
By Dawn Killough
COMMERCIAL ROOFING
Capacitación para contratistas especializados en techos: apoyo en todos los niveles
LEARN MORE

In business, time is money. With advanced roofing technology, you can save time, improve your team's efficiency, and boost your company's bottom line all at once. Ranging as widely as business management systems that streamline productivity and digital measuring tools, here are a few roofing products and solutions to incorporate into your business so you can work smarter rather than harder.
By Wendy Helfenbaum
This blog contains information created by a variety of sources, including internal and third party writers. The opinions and views expressed do not necessarily represent those of GAF. The content is for informational purposes only. It is not intended to constitute financial, accounting, tax or legal advice. GAF does not guarantee the accuracy, reliability, and completeness of the information. In no event shall GAF be held responsible or liable for errors or omissions in the content or for the results, damages or losses caused by or in connection with the use of or reliance on the content.