A Case Study Shows the Minimal Impact of the Winter Sun

There has been a school of thought that dark roofs help heat buildings located in the north during winter. Articles claiming this to be the case have always been based on the use of electric heat. Gas heat is less expensive and in previous studies we have shown that reflective roofs (aka cool roofs) are more energy efficient throughout the US, even in cities such as Minnesota, MN and Fargo, ND! Here, a case study approach is used to examine the impact of dark versus reflective membranes, and gas versus electric heat. Different levels of demand charges were included. Cities ranged from Chicago, in the north, Orlando in the south, Portland in the west, and Charleston in the east. The results are surprising – demand charges for electricity use are the largest determining factor by far. Without taking into account demand charges, building owners could be losing out on energy efficient roofing choices.

Today, highly reflective membranes, aka "cool-roofs", might be accepted as a logical means of lowering energy costs in warm and sunny climates for those buildings with air conditioning. Examples include thermoplastic polyolefin, TPO, and polyvinyl chloride, PVC.

However, some studies have claimed there's a heating penalty associated with using reflective membranes in the north. Many of these studies have assumed commercial buildings are heated with electricity or haven't disclosed the heating energy source at all. 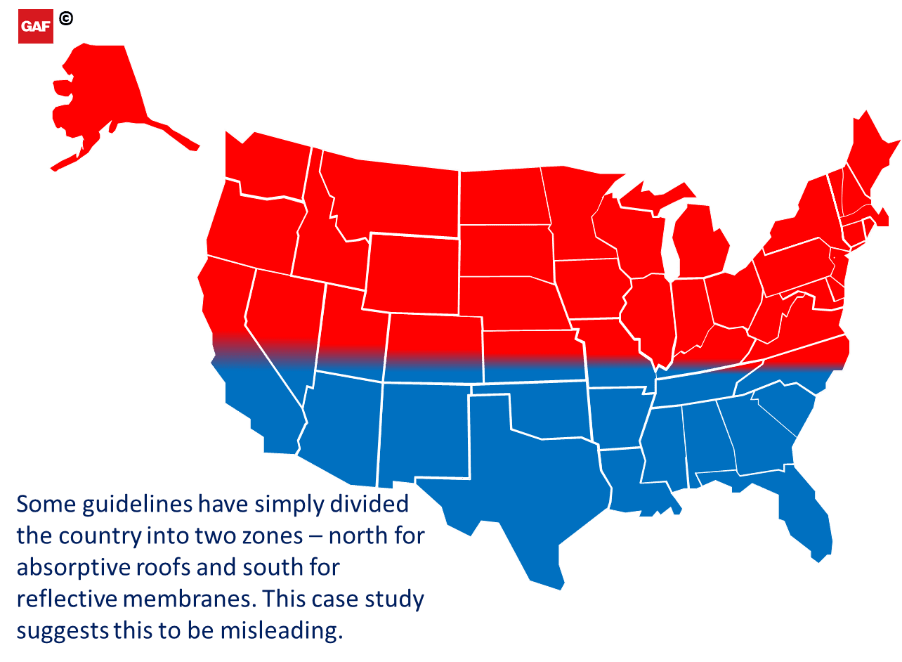 In this article, a case study approach is used to compare energy costs/savings with reflective roofs versus dark absorptive roofs when using electric versus gas heat. Not only is electricity four times more expensive than gas on a unit of energy basis, but electric tariffs can include demand charges. A majority of commercial buildings have demand charges as part of their electric bill, these representing up to 50% of the total electric charge.

Description of Building – The building used for this study was single story big-box type, less than 35 feet in height, with a roof area of 125,000 ft2 in a rectangular configuration of approximately 290 × 431 ft. The roof was assumed to be a new installation, i.e., new construction or a total roof replacement.

Roof Assembly – The membrane to be evaluated was assumed to be TPO, with three-year aged reflectance of 68 and emittance of 83, these representing long-term roof performance. This was compared with an absorptive membrane, i.e. EPDM. Reflectivity and emissivity data for most membranes can be found in the Cool Roof Rating Council's directory.

An insulation thermal resistance of R-30 was used because this value is representative for most US locations per the 2015 International Energy Conservation Code. Therefore, results and conclusions of this study would be applicable to new construction and reroofing of existing buildings.

Building Location and Energy Costs – It's generally recognized that reflective roofs are appropriate for southern locations where air conditioning dominates. For this case study, five northern cities were considered. These and the associated energy costs for gas and electricity are shown below. The gas and electric costs for commercial customers were obtained from the US Energy Information Administration and averaged over 2017:

Energy Modeling – The Oak Ridge National Labs CoolCalcPeak calculator was used to compare energy costs for each Case relative to the design R-30 value. The building air-conditioning coefficient of performance was set as 2.5 and the natural gas heating efficiency was set as 0.8. Both are high-efficiency values and would be more typical of today's heating and air-conditioning systems installed in new construction. 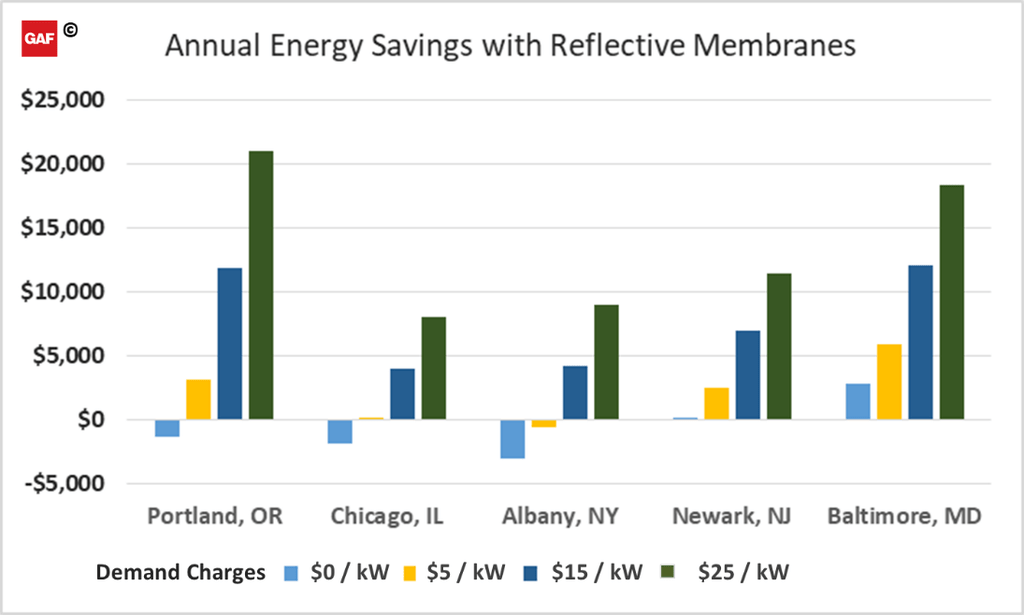 The building placed in either Newark or Baltimore would have energy savings regardless of the size of the demand charge. However, for Chicago or Albany, demand charges of $5 / kW and less showed added costs, and for Portland, a cost was incurred when the demand charge was set as $0 / kW. Looking more closely at the savings for these three cities as a function of demand charge shows the following: 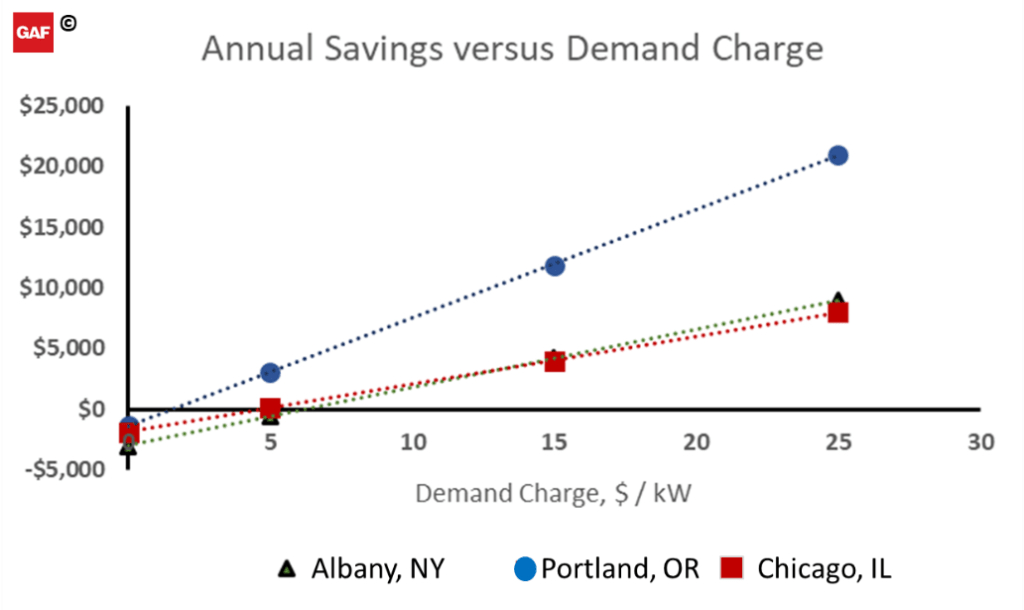 This case study clearly debunks the myth that absortive roofs such as EPDM will be energy efficient when using electric heat. It is only when demand charges are either zero or below around $5 / kW that there might be a slight benefit to dark roofs in northern cities such as Chicago. As demand charges increase, so does the case for always specifying a reflective roof membrane such as TPO or PVC.

A Discussion of Demand Charges and Electric Heat 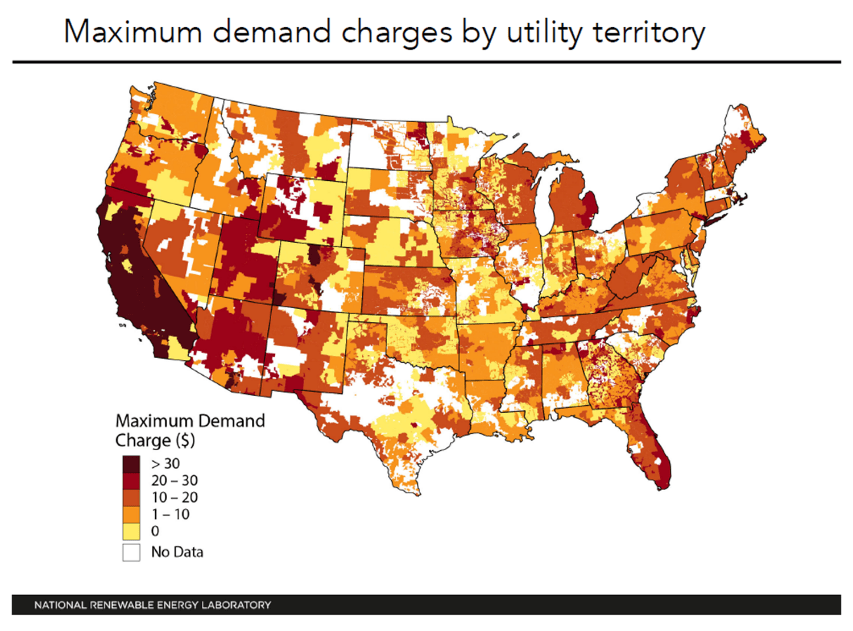 While such charges clearly impact air conditioning, for those who assumed electric heat when modeling building energy efficiency it is important to understand how frequently that might be the case. There isn't data available to show the prevalence of electric heating in commercial buildings. However, it is likely to be related to the availability of natural gas supply, and therefore it might mirror the use of electric heat in residential construction. The Energy Information Administration has published the following survey of heating energy source for major US regions: 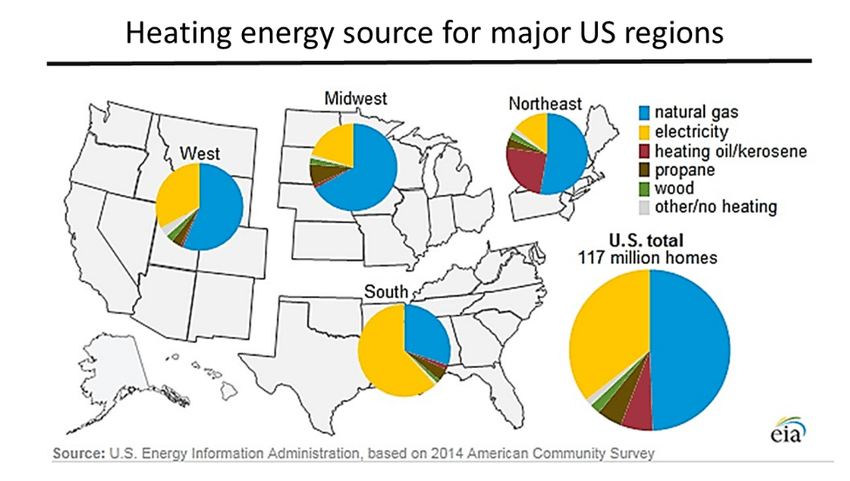 When using electric heat, absorptive or dark membranes are only energy efficient in the north when demand charges are very low. But, electric heat has limited use in the north and is more typical of buildings in the south where air conditioning costs dominate.

Will a Cool Roof Always Result in Actual Cost Savings?

There are a few reasons why some may not receive lower electric bills after converting to cool roofs. For example, overall electric costs may rise year over year or the utility rate structure could change. Also, changes beyond the roof system, such as in the building's use, mechanical equipment, or operating patterns could increase overall building's energy consumption. Suffice to say, modeling shows that cool roofs reduce the impact of solar energy on a building and several case studies have demonstrated reduced utility bills. But, each building is unique and should be evaluated on its own terms.

Want to know more? The study shown here is based on a larger article published in Buildings which was peer reviewed by independent experts.

In 1994, GAF's manufacturing plant in Shafter, California opened with a 19-year-old Ruben as an Operator on the original starting crew. While he only planned on staying for five years, Ruben remained on the Shafter team, holding various roles from Operator to Process End Leader to Shift Supervisor. He then took on more responsibility as Production Shift Lead for about five years. After his time on the line, Ruben then was granted an Electrical Apprenticeship, shifting the trajectory of his roles. He held positions as the Electrician Onsite, Electrical Team Lead, and Electrical Controls Specialist – a role he held for about seven years. He then was promoted to Senior Controls Specialist, until he most recently was selected as the Manager for GAF's new Incubation Center. In this role, he supports the hands-on installation, troubleshooting, and technology evaluation to accelerate innovation across GAF.
By GAF Roof Views
BUILDING SCIENCE
Prevailing Winds and Prevailing Codes: A Summary of Roof Related ASCE 7-22 Changes
LEARN MORE

Several changes have been included in the 2022 version of ASCE 7 as they relate to roof. You may be thinking, 'as soon as I mastered ASCE 7-16, an updated version is set to be released!'. As with any Standard, it can be expected that updates will be made to include current research or trends. While the inclusion of tornado loads and the resulting changes in the load combinations may be the most significant, there are other updates that affect roofing as well. From minor updates to basic wind speed maps, to stepped roofs, and pavers, we have compiled a summary to help you navigate the updates. Not to fret, the changes are likely to not be incorporated until the 2024 version of IBC. However, that does not preclude incorporating these changes on current and upcoming projects.
By Kristin M Westover PE
YOUR HOME
How to Choose the Right Roof Shingles for Your Home
LEARN MORE

You have no shortage of options when you go to select roof shingles for your home. That can be a blessing and a curse—while you have the flexibility to boost your home's curb appeal in a way that matches your personal style, the overabundance of choices can make picking one all the more difficult.
By Karen L Edwards
This blog contains information created by a variety of sources, including internal and third party writers. The opinions and views expressed do not necessarily represent those of GAF. The content is for informational purposes only. It is not intended to constitute financial, accounting, tax or legal advice. GAF does not guarantee the accuracy, reliability, and completeness of the information. In no event shall GAF be held responsible or liable for errors or omissions in the content or for the results, damages or losses caused by or in connection with the use of or reliance on the content.